Cong wants one-third of seats in tie-up with TMC

West Bengal Congress on Monday said the party should get one-third of the seats it will contest in alliance with Trinamool Congress in the state assembly polls due in May, replicating the formula adopted during the Lok Sabha polls in 2009.

"We have placed recommendations to party chief Sonia Gandhi to follow the same formula adopted in 2009 parliamentary elections in relation to the partnership with TMC," state Congress chief

Manas Bhunia told mediapersons after a meeting with the UPA

He said the TMC-Congress alliance in West Bengal is the "most rational way" to repeat the performance of the Lok Sabha elections, in which the combine gave a drubbing to the ruling Left Front.

"In the seat sharing formula, two-thirds of the seats must be allotted to TMC, and one-third to Congress. This, I feel, is the most rational suggestion," Bhunia said. The strength of West Bengal assembly is 294.

The WBPCC chief said he also urged the Congress high command to discuss the seat-sharing formula as early as possible, but hastened to add that it was upto Sonia Gandhi to take the final decision.

Gandhi, he said, also gave directions to the state unit to form monitoring and vigilance committees in the block, district and state levels to look into the "misuse of the funds given by the Centre".

"In addition, she asked us to report to her at 15 days' interval to ensure that the UPA flagship programmes are promoted even in rural areas," he added.

Bhunia expressed confidence that the Trinamool-Congress combine would trump the Left in the polls as this was "the long-felt aspiration of the people."

"The people must be freed from the bondage and political slavery of the Marxist-Communist government. I also discussed this issue with Union Finance Minister Pranab Mukerjee last night," said Bhunia.

The Communist Party of India-Marxist-led Left Front has been at the helm of West Bengal for over three decades now.

"The state has suffered under the Left for decades now. The state is in a wretched condition. Everything has gone down except probably torture on women which is on the rise. (Chief Minister) Buddhadeb (Bhattacharjee) deserves a gold medal for this achievement," he said.

After his meeting with Gandhi, Bhunia also met Union Power Minister Sushilkumar Shinde to discuss the alleged "non-implementation" of power schemes in the state.

"Schemes like the Rajiv Gandhi Grameen Vidyutikaran Yojana isn't implemented in the state. Out of the 1,03,90,270 families in the state, only 40 lakh have electricity. I asked Shinde to talk to departments like NTPC, REC and NHPC to ensure that power schemes are implemented in underdeveloped districts like West Midnapore and Bhirbhum," he said. 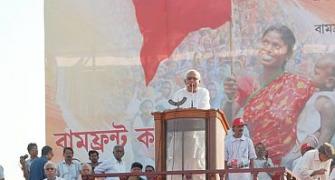 'Yes we made mistakes, but we are rectifying them'
TMC to stay with UPA for full tenure: Mamata Mamata may not hike rail fare despite fund crunch