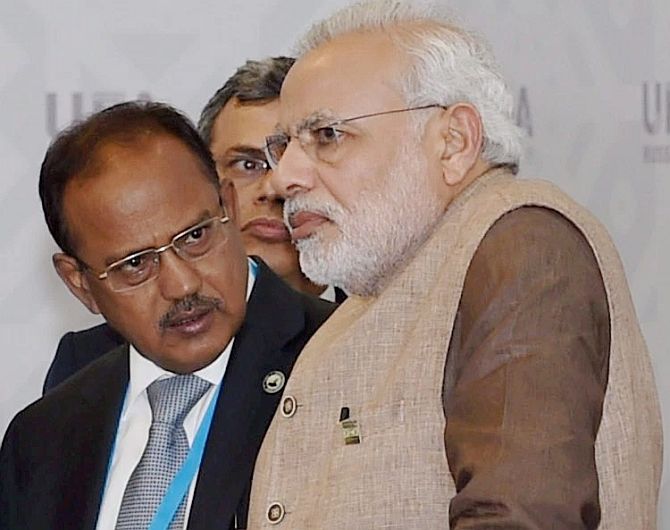 Sounding the bugle for the 2019 Lok Sabha polls from Modi's home state, he fired a fresh salvo at the National Democratic Alliance regime on a slew of issues, including the Rafale deal, demonetisation and the implementation of the goods and services tax.

Addressing a rally at Adalaj village of Gandhinagar district in the presence of United Progressive Alliance chairperson Sonia Gandhi, his sister and general secretary Priyanka Gandhi Vadra and other top party leaders, he reiterated that there was massive corruption in the Rafale deal.

"And Narendra Modiji, your National Security Adviser, (Ajit) Dovalji (who was then with the Intelligence Bureau), escorted Masood Azhar to Kandahar (in Afghanistan)," he said.

Azhar and two other terrorists were set free by the Vajpayee government in exchange of hostages of the IC-814 Indian Airlines flight hijacked to Kandahar in December 1999.

Azhar later went on to set up the Jaish-e-Mohammed, a Pakistan-based terror outfit that claimed responsibility for the February 14 suicide attack on a Central Reserve Police Force convoy in Pulwama.

"Explain to the country, why did you send the person who killed those 40-45 martyrs, on a special plane? Tell the country why your government sent him to Pakistan.

Gandhi again targeted Modi on the Rafale deal, saying, "He (PM) speaks about pilots and air force but in the Rafale fighter jet deal he has taken away Rs 30,000 crore from them and given it to Anil Ambani."

"Anil Ambani has never made a plane in his life. If I give him a piece of paper he would not be able to make a plane out of that also," the Congress chief said, mocking the industrialist.

The Centre has repeatedly denied any irregularities in the mega defence deal with France. Ambani has also emphasised the government had no role in the Rafale manufacturer Dassault picking up his company as a local offset partner.

Later, talking to reporters, Rahul Gandhi rejected the notion that political atmosphere in the country has changed in favour of the ruling BJP after the Pulwama terror attack and the subsequent air strike on a JeM camp in Pakistan.

He claimed that key issues such as farm distress and unemployment will remain at the core of the April-May polls.

"I don't think so," he said when asked by reporters whether he feels the political atmosphere has changed after the terror attack and the air strike.

"See, apart from corruption and farm distress, another important issue is jobs. Unemployment has increased due to demonetisation and GST.

"Unemployment ratio is at a 45-year high today. People are still angry as their expectations were not fulfilled. Employment generation was a complete failure," he said.

Asked which key issues his party would focus on to target the Modi government during the Lok Sabha polls, he said the main focus will be on Modi's 'personal corruption' in the Rafale deal.

"This is the main issue. The people of Gujarat are smart enough to understand that Modi ji did commit some mischief in the Rafale deal," he said

He also accused Modi of distracting people from key issues such as employment.

Gandhi also targeted the Modi government on the issue of recent tracking of fugitive businessmen Nirav Modi in London.

Earlier in the day, a meeting of the Congress Working Committee (CWC), the party's highest decision-making body, was held in Gujarat after a gap of 58 years.

The last CWC meeting in Gujarat was held at Bhavnagar way back in 1961.

"After many years the CWC meeting was held in Gujarat. And we kept the meeting in Gujarat because there is a fight of two ideologies in India.

"And you will see both the ideologies in Gujarat. On one hand is Mahatma Gandhi, who gave up every moment of his life to build the country. And the other ideology you know," he said, apparently referring to the BJP-Rashtriya Sawayamsevak Sangh combine.