The Congress dubbed the decision as an attempt by the BJP to exploit the respect these religious leaders enjoy in the society. 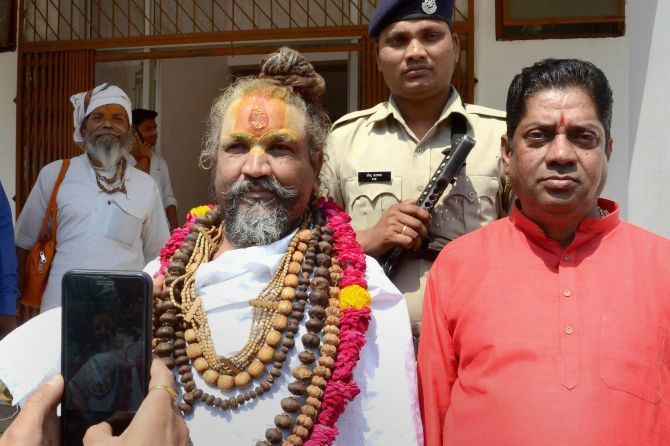 IMAGE: Spiritual leader Namdeo Das Tyagi, popularly known as Computer Baba, who is among five seers been given Minister of State status by the Madhya Pradesh government, in Bhopal on Wednesday. Photograph: PTI Photo

Ahead of assembly elections due later this year, the Bharatiya Janata Party government in Madhya Pradesh on Tuesday accorded the Minister of State status to five Hindu religious leaders, two of whom have cancelled their proposed campaign against an alleged scam in the Madhya Pradesh government's Narmada conservation programme.

The government's move was slammed by the Congress.

On March 31, these five religious leaders were appointed to a committee set up for the conservation of the Narmada river.

As members of the committee, they have been given the MoS status, a GAD official said.

Chief Minister Shivraj Singh Chouhan sought to downplay the controversy, saying his government wanted to rope in people from all walks of life for welfare and development.

Computer Baba had earlier announced that he would take out 'Narmada Ghotala Rath Yatra', along with Yogendra Mahant, in every district of MP from April 1 to May 15, to expose an alleged scam in planting of saplings on the banks of the Narmada and to demand action against illegal sand mining.

The publicity material of the campaign was also circulated widely on social media.

Computer Baba on Wednesday said they have cancelled the campaign, because the state government has fulfilled their demand to form a committee of saints and seers for protection of the Narmada river. "Now why would we take out the yatra?" he said.

"As a member of the committee, we have to talk to the district collectors and look after other necessary arrangements for the river's conservation. A government status is required for these works," he said.

Yogendra Mahant, who was the convener of the proposed campaign, also said that they cancelled the 'yatra' as the state government fulfilled their demand to set up a panel for the river conservation.

Asked by reporters as to why his government accorded the MoS status to religious leaders, Chief Minister Chouhan said, "We want to associate people from all walks of life in the work towards development and welfare of the people. So we have made efforts to bring together all sections of the society."

He was talking to reporters after a function at Jatara town in Tikamgarh district.

Assembly elections are due in the state this year, and the Congress dubbed the decision as an attempt by the BJP to exploit the respect these religious leaders enjoy in the society.

"It’s a gimmick to score political points. This is also an effort by the chief minister to wash off his sins. He ignored conservation of the Narmada. These saints should inspect where the state government has planted six crore saplings (along the river banks) as claimed by the CM," said Congress spokesperson Pankaj Chaturvedi.

"Saints and seers were accorded the MoS status to make their work of environment and river conservation easy. The saints were roped in for the Narmada conservation work to ensure public participation," Agrawal said.

Bhayyu Maharaj, one of the five 'saints' appointed to the committee, told PTI that he will shun the perks associated with the MoS status.

"I will try my level best to play my role as a member of the special committee constituted for conservation of the Narmada. However, I will not take any government benefits that come with the MoS status," he said. 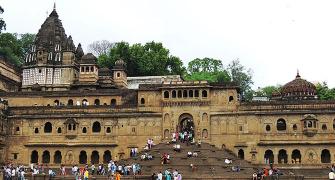 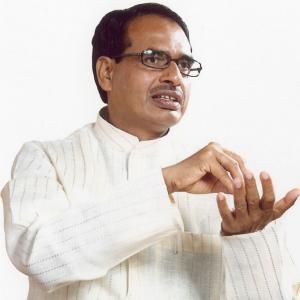 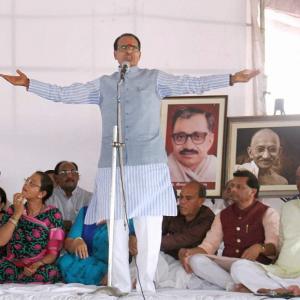 Shivraj Chouhan needs to get his act together fast