CoBRA commando killed in encounter with Naxal in Jharkhand 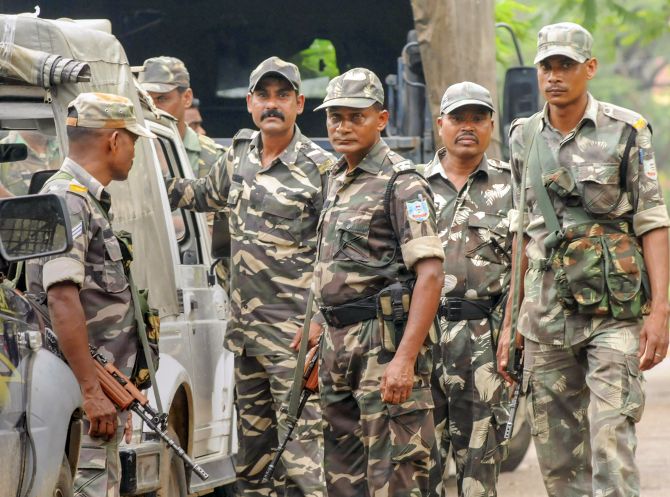 IMAGE: Security force personnel wait outside Rajendra Institute of Medical Science hospital for the post-mortem of two of their members, who died in encounter at Karra forest with suspected Maoist groups,  in Ranchi. Photograph: PTI Photo

A CoBRA commando of the Central Reserve Police Force and a policeman were killed during an encounter with Naxals in Jharkhand's Saraikela area on Thursday, officials said.

The gunbattle began around 7 am in the Dalbhaga-Arki area of Saraikela-Kharsawan district when a joint team of the 209th Battalion of the CoBRA (Commando Battalion for Resolute Action) and the Jharkhand Police was out for an operation, they said.

Commando Utpal Rabha, 27, hailing from Meghalaya's North Garo Hills district, was killed during the encounter, while a state police personnel succumbed to injuries, they said.

The encounter took place in Saraikela, the administrative headquarter of Saraikela- Kharsawan district, around 135 km from the state capital, the officials said.

Heavy firing is still on and further details are awaited, they said.

How to neutralise the Maoist challenge