Citizenship law doesn't affect any Indian of any religion: PM

Prime Minister Narendra Modi on Monday termed violent protests across the country against the Citizenship Amendment Act as "unfortunate and deeply distressing", and appealed to people to stay away from rumour-mongering and not let "vested interests" divide the society. 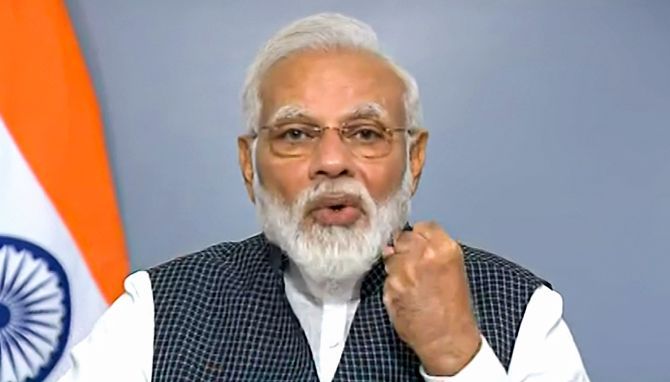 In a series of tweets, Modi also assured that the amended citizenship law does not affect any Indian of any religion.

As violence and unrest spread across various states against the CAA, the prime minister said "this is the time to maintain peace, unity and brotherhood. It is my appeal to everyone to stay away from any sort of rumour-mongering and falsehoods."

Violent protests on the amended citizenship law are "unfortunate and deeply distressing", he said adding that debate, discussion and dissent are essential parts of democracy, "but never has damage to public property and disturbance of normal life been a part of our ethos."

Modi said he unequivocally assures people that tweaked law does not affect any citizen of India of any religion.

"No Indian has anything to worry regarding this Act. This Act is only for those who have faced years of persecution outside and have no other place to go except India," he tweeted.

Asserting that the law was passed by both Houses of Parliament with overwhelming support, Modi said,"large number of political parties and MPs supported its passage. This Act illustrates India's centuries old culture of acceptance, harmony, compassion and brotherhood."

Modi had also tweeted on December 12, a day after the contentious law was passed by Parliament, to assure the people of Assam that they have nothing to worry about the amendment act. The passage of the law triggered violent protests in the entire North East.

Modi's Monday tweet comes amid spiralling protests across the country, including educational campuses against the law.