With an aggressive Opposition and unyielding government, important legislation could be the biggest casualty, as details of the helicopter contract surface. 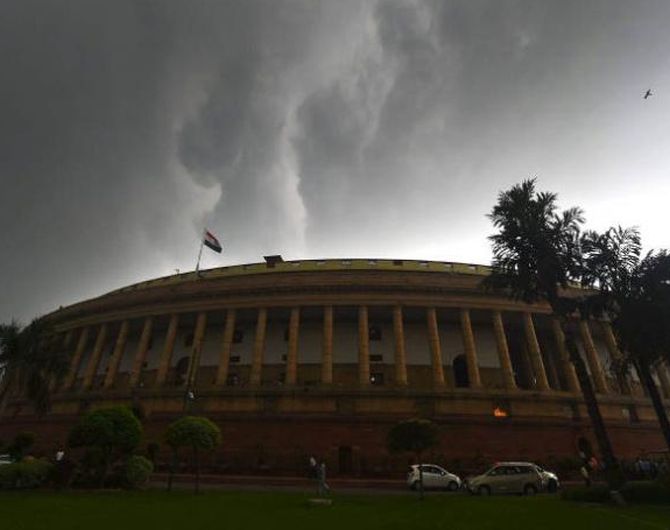 A war that threatens to kill the legislative agenda of the budget session of Parliament and possibly the coming monsoon session has broken out between the government and the Opposition, with the Congress alleging that the government is out to “fix” it.

With Congress president Sonia Gandhi the target of corruption charges in the AgustaWestland helicopter deal and fresh revelations in the Aircel Maxis inquiry that mire the family of former Finance Minister P Chidambaram, the Congress is militant, the government unyielding and the biggest casualty, important legislation, including the Goods and Services Tax Constitution Amendment Bill.

“This (Parliament) session is gone”, conceded government leaders. The argument over the imposition of President’s rule in Uttarakhand along with updates in the helicopter deal from London, in which “more names are expected to come out”, will likely drive this session off the rails and will have its reverberations in the monsoon session as well.

Rajya Sabha MP Subramanian Swamy put the cat among the pigeons when he rose to say “Sonia Gandhi” in the Rajya Sabha. The rest of his sentence was expunged. The House erupted in frenzy and had to be adjourned twice and eventually until 2 pm. They did discuss drought in the afternoon, but it was under a non-voting motion.

Finance Minister Arun Jaitley told a meeting of the consultative committee on non-performing assets that the Joint Committee on Insolvency and Bankruptcy Code has submitted its report and it is likely to be taken up in the ongoing session. Sources said the committee has accommodated all amendments moved by opposition members and submitted its report without any dissenting notes. This, and the raging debate on NPAs and willful default of bank loans by industrialists like Vijay Mallya, might make the government as well as the Congress to allow discussion and passage of the Bill.

The Congress was primed from the morning as Sonia Gandhi on Wednesday convened a truncated Congress Working Committee meeting at her residence where she wiped her eyes as she tried to articulate her feelings at the way she was being targeted by the government.

Her daughter Priyanka Gandhi Vadra, who is likely to play a bigger and more visible political role, was present throughout the strategy session also attended by former Defence Minister A K Antony who had instituted the inquiry into the AgustaWestland deal and cancelled the contract.

Leader of the Opposition in the Rajya Sabha Ghulam Nabi Azad first raised the AgustaWestland issue in the House, citing a news report in The Hindu, demanding to know if any meeting had occurred between the Indian and the Italian prime ministers and a deal struck whereby Italian marines would be freed in exchange for incriminating information against the Gandhis. Leader of the House and Finance Minister Arun Jaitley rejected outright the charges and said the “investigation is at an advanced stage” and while it was clear that bribes had been given, “the taker of the bribe has to be established”.

Later, a combative Sonia Gandhi told the media, “I am not afraid. This is typical of the character assassination kind of politics that they (the Bharatiya Janata Party) indulge in.”

Antony described as “criminal negligence” the two-year delay by the National Democratic Alliance government on the investigation against AgustaWestland. Antony demanded to know the “compulsions” under which the Modi government allowed a “blacklisted company” (it was blacklisted in July 2014) to take part in the government’s hyped Make In India programme, with permission to bid for defence business in India as partners or sub-contractors, despite objections raised by the Central Bureau of Investigation and the Enforcement Directorate.

Without mincing his words, Congress spokesperson Randeep Surjewala said, “Is it not a fact that Air Chief Marshal SP Tyagi (who is a central figure in the deal) has been part of the Vivekananda International Foundation?” He asked the government to come clean on the connection between Tyagi, National Security Adviser Ajit Doval and Nripendra Mishra, principal secretary to Prime Minister Narendra Modi.

Taking the attack to the BJP camp, the Congress raised questions about BJP Chief Ministers Raman Singh and Vasundhara Raje, who have both been indicted by the Comptroller Auditor General reports for purchase of AgustaWestland helicopters, allegedly causing loss to the exchequer.

Congressmen ensured that they attacked the government, not just within Parliament but outside, for the “political conspiracy” against the party’s leader. But the BJP was not backing down either. Several Lok Sabha MPs have given notices for discussion on the helicopter deal that Defence Minister Manohar Parrikar will reply to.

In the Lok Sabha BJP MP Nishikant Dubey raised the Aircel Maxis issue and asked the government to clarify the exact legal nature of the investments made by the family of former Finance Minister P Chidambaram. Later, at a press conference, Skill Development Minister Rajiv Pratap Rudy was fielded to say the government must look at the ‘benami empire’ established all over the world by the family of P Chidambaram.

It is highly unlikely that any bills will be passed by the Rajya Sabha, where the government is in a minority, in the remainder of the session. Only financial business like passing ministry-related grants is on the Lok Sabha’s agenda, the House having already passed bills on biotechnology and the composition of the Sikh Gurudwara Prabandhak Committe.

In the Rajya Sabha, only issues relating to emergencies like drought and farmer suicides are likely to be permitted. It remains to be seen whether the Congress makes an exception for the Insolvency and Bankruptcy Code in the Upper House.

Later in the day, Ministry of External Affairs spokesperson Vikas Swarup also denied that any meeting took place between the Italian and Indian PMs on the sidelines of the UN General Assembly in September 2015. He said various law enforcement agencies of India are moving against James Christian Michel in cases relating to the Prevention of Corruption Act and Prevention of Money Laundering Act.

The chopper story so far

On April 7, 2016, an Italian appeals court sentenced former Finmeccanica Chief Executive Giuseppe Orsi to four–and-a-half years in prison for corruption and falsifying invoices. This overturned a lower court ruling holding Orsi guilty only of false invoices. Orsi was on trial for alleged bribes in a €560-million ($638 million) contract awarded to Finmeccanica unit AgustaWestland in 2010 to supply helicopters to India.

Bruno Spagnolini, former head of AgustaWestland, was sentenced to four years in jail. The court also ordered the two executives to pay €7.5 million ($8.5 million), a sum related to the amounts deemed to have been allegedly paid in bribes. Both Orsi and Spagnolini are going to appeal in Italy’s Supreme Court. Italian public prosecutor Eugenio Fusco had accused Orsi and Spagnolini of paying tens of millions of euros to Indian officials, including a former air force chief, through intermediaries.

Both were acquitted of the corruption accusations. Judge Luisa Bovitutti said the conviction concerned invoices dating to 2009 and 2010 and the acquittal on corruption charges was made because “there was no case to answer”.

AgustaWestland was chosen to supply 12 helicopters to the government to replace the Soviet-built Mi8s, whose working life ran out in 2014. Negotiations began in 2000 and because the specifications were so precise only the Eurocopter qualified.

Brajesh Mishra, the then principal secretary to the prime minister, said this was to be avoided, and the specifications were lowered to make the deal more competitive. This left just two big players in the field, AgustaWestland and Sikorsky.

In 2010, after field trials showed AgustaWestland had the better aircraft, Sikorsky complained it had not been briefed on certain concessions and the trials had been unfair. It followed this up with a legal notice to the ministry of defence.

The Italian public prosecutor produced documents they found at the residence of Guido Ralph Haschke, a middleman who contacted another ‘facilitator’, Christian Michel, who is said to have had contacts in the Indian government and is a defence middleman. The note has headings “AF”, which prosecutors said stood for air force, “BUR” for bureaucrats, “POL” for politicians and “Fam” for family members of the former Indian air force chief of staff, SP Tyagi. Prosecutors allege the family members-three brothers who are the cousins of the former air chief-shared the money among themselves and the chief.

“Staff qualitative requirements for the VVIP choppers were frozen in 2003, much before I assumed office of chief of air staff and the IAF did not change any requirements after that,” Tyagi has said. His service records reveal he never had anything to do with procurement.

The last point of procurement-related decision in the IAF is the deputy chief of air staff. Tyagi has never held this office. Below this are six other officers. He has never held any of those appointments either.

But the papers also revealed other facts. Under POL the note lists Euro 3 million for “AP.” Prosecutors said in court they believed the initials referred to Ahmed Patel, political adviser to Congress President Sonia Gandhi.

Italian prosecutors alleged that India’s anti-corruption watchdogs also were on the list of those who received payoffs. The lists heading “CVC”, they said, referred to the Central Vigilance Commission and “Auditor Gen” to the Comptroller and Auditor General.

In its FIR, the CBI --  to which the matter was referred when former Defence Minister AK Antony cancelled the order -- said the IAF had throughout opposed lowering the altitude requirement but when Tyagi took it agreed to reduce it.

Tyagi’s three relatives, Rajiv, Sanjeev and Sandeep Tyagi, were paid via fake companies. “Guido Haschke managed to send Euro 5.6 million through the Mohali-based IDS Infotech and Chandigarh-based Aeromatrix Info Solutions to India and kept the remaining amount of about Euro 24.30 million received from AgustaWestland with themselves in the account of IDS Tunisia,” says the CBI FIR.

Orsi has denied hiring Haschke and Michel to influence the helicopter deal, saying it was not necessary. “The AgustaWestland 101 was the helicopter the Indians wanted,” he said in court.

The Italian court order relies on the old evidence that mentions, but does not name, Sonia Gandhi or Manmohan Singh as recipients of bribes. As the CBI awaits the English translation of the order, the alleged clincher is a letter dated March 15, 2008, from Michel to Peter Hulet, then India region sales and liaison head of AgustaWestland. It reads: “Dear Peter, since Mrs Gandhi is the driving force behind the VIP, she will no longer fly with MI8 … Mrs Gandhi and her closest advisers are the aim of the high commissioner, senior advisor Prime Minister Manmohan Singh obviously the main figure, then there’s Ahmed Patel secretary.”

BJP Rajya Sabha MP Subramanian Swamy has named Sonia Gandhi on the floor of the House as a beneficiary from corruption. Congress Spokesperson Randeep Surjewala said if anybody needed to answer questions on the matter it was the Modi government.

He said the United Progressive Alliance government had included an integrity clause according to which the contract for purchase of helicopters from AgustaWestland was cancelled, the guarantee forfeited and process initiated for recovery of money. Surjewala said the money was recovered and “not a single rupee loss was caused to the government of India.” He said the UPA government had also ordered a CBI inquiry as well as initiated the process of blacklisting AgustaWestland.

“As the government changed in May 2014, Modiji proceeded to cancel the process of blacklisting AgustaWestland. Why did Modiji not blacklist AgustaWestland?” Surjewala asked. 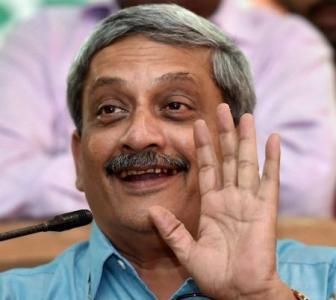 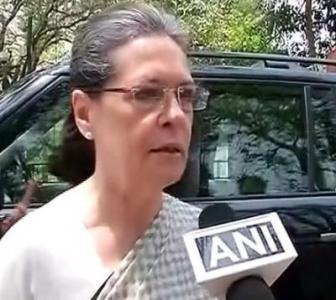 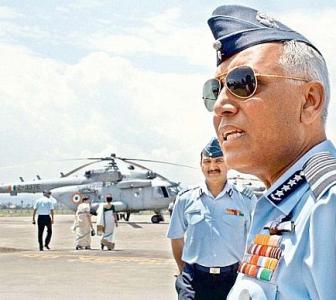