Alleged middleman Guido Haschke had ‘cleaned up’ all the documents from his computer that related to the VVIP chopper deal in which kickbacks were allegedly involved with Italian investigators saying the details could open a ‘Pandora's box’.

But to Haschke's misfortune, the documents were retrieved from his computer hard drive along with other papers he had hidden at his mother's home.

According to reports in the Italian media, the investigators have termed the information found in his computer drives as ‘Pandora's box’ where he has noted details of his appointments, his meetings with Indian intermediaries, in Italy and Lugano and several international transactions including that of Finmeccanica.

These documents are being used by the prosecutors in the Italian court Tribunale de Busto Arsizio to build their case in fixing responsibilties of several accused including former Finmeccanica chief Giuseppe Orsi for allegedly paying Rs 360 crore in kickbacks to bag the Rs 3,600 crore deal, reports in Italian daily Republica suggested.

"He thought he had deleted everything, buried every track on the big business on behalf of Finmeccanica. He had 'cleaned up' all his computer and he felt calm," the daily said quoting the Italian investigators' report.

It said the prosecutors in the court Busto Arsizio recovered the ‘computer hard drives of Haschke where the intermediary had recorded the whole story about the sale of helicopters and other business’.

"Documents and files that are now on the table of the prosecutor of Busto Arsizio, Eugenio Fusco, who is trying to rebuild any responsibilities and roles of the protagonists of this 'affair'," it said.

The report said, "The fate of Orsi is entrusted to its reading of the documents found in a suitcase that Haschke had hidden in his mother's house and found those files in his computer that he thought he had cleared and reset."

Haschke is alleged to have been appointed by former Finmeccanica CEO Giuseppe Orsi for clinching the deal for AgustaWestland in which 51 million euros were allegedly paid as kickbacks.

Orsi has denied any kind of involvement in paying bribes for bagging the deal. 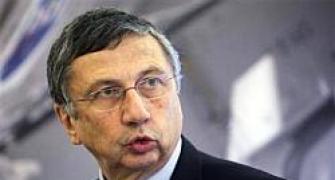