The bodies of six more armed forces personnel, killed in the Indian Air Force chopper crash near Coonoor, were identified and the last rites of all but one of them were conducted on Saturday at their native places with appropriate military honour. IMAGE: Mortal remains of Chief of Defence Staff (CDS) General Bipin Rawat, his wife Madhulika Rawat and other defence personnel who died in the helicopter crash, during a wreath laying ceremony at Palam airbase in New Delhi on Thursday. Photograph: Rahul Singh/ANI Photo

Officials said efforts are on to 'positively identify' the remaining four bodies kept in the mortuary of the Army Base Hospital in Delhi Cantonment.

JWO Pradeep was cremated this evening at the premises of his residence at Ponnukkara village in Kerala's Thrissur district with his son lighting the pyre. His mortal remains were brought to Sulur airbase in Coimbatore from New Delhi around 11 am and taken to Kerala by road.

Thousands of people gathered on both sides of the National Highway to pay homage to the departed soul. Hundreds paid their last respects to the soldier when his mortal remains were brought to his school in Puthur around 3 pm.

Later, the body was taken to his residence for cremation.

She later said she wants to follow her father's footsteps and become an Indian Air Force (IAF) pilot too. Officials from the IAF, Agra administration and police among others, too, paid their tributes to the wing commander.

The mortal remains of Kuldeep Singh were consigned to flames in Rajasthan's Jhunjhunu district with his wife Yashwani lighting the funeral pyre.

Earlier, the body reached Jhunjhunu airstrip in a helicopter where he was given floral tributes. A decorated truck of the IAF left for his village Ghardana Khurd with the mortal remains.

Thousands of people reached the village to pay tributes.

In Himachal Pradesh, Lance Naik Kumar was cremated with full state honours at his native village in Kangra district.

People in large numbers bid final adieu to Kumar at the crematorium at Thheru village in Jaisinghpur.

The mortal remains of JWO Das were consigned to flames at his native village in Odisha's Angul district.

His body was brought to his village Krushnachandrapur near Talcher where thousands of people lined up on both sides of the road to pay respects.

The funeral rites were held in the presence of family members including Das's old parents, IAF personnel, and hundreds of people at a crematorium in his native village.

Mahanadi Coalfields Ltd had prepared the special crematorium at the village for his last rites.

Sai Teja, hailing from Chittoor district in Andhra Pradesh, will be laid to rest on Sunday. His mortal remains were brought to Bengaluru, from where it would be taken to his native village, Yeguvaregadipalli for cremation.

According to defence officials, Teja's body will be kept at the Command hospital in Bengaluru and will be taken to Chittoor on Sunday.

During the day, the ashes of General Rawat and his wife were immersed in the Ganga in Haridwar by their daughters Tarini and Kritika.

A wreath-laying ceremony was held at the National Defence Academy in Pune in memory of its alumnus Gen Rawat, Brig Lidder and Wing Commander Chauhan.

Air Marshal Sanjeev Kapoor, Commandant, NDA paid homage to the brave hearts, who lost their lives in the helicopter crash.

The personnel whose bodies are yet to be identified are Lt Col Harjinder Singh, Havildar Satpal, Naik Gursewak Singh and Naik Jitender Kumar. 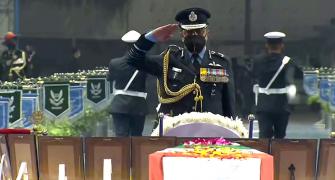 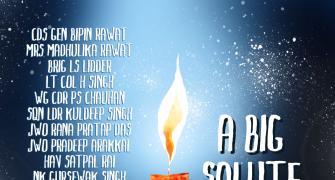 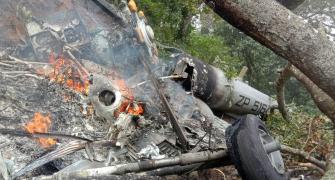 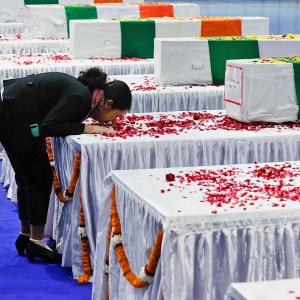