China cracks down on Tibetan intellectuals

The arrest and imprisonment of noted environmentalist Karma Samdrup has sent shock waves through the Tibetan community, who perceive it as a renewed crackdown by the Chinese authorities on anyone trying to assert their Tibetan identity.

Samdrup was thrown behind bars after his brothers Rinchen and Chime Namgyal accused a local police chief of hunting protected animals, according to a report by the New York Times. They were also jailed for raising their voice, said the paper.

The powerful and rich philanthropist is facing charges of 'tomb robbing' and setting up a bogus environmental agency, among others, said the NYT.

His arrest comes in the wake of reports about the arrest of hundreds of students, bloggers, musicians, artists and businessman for encouraging the secessionist movement in Tibet.

Similar cases of arrest and torture of prominent Tibetans for minor crimes have shaken the community, says the NYT.

Tragyal, an editor at a state-run publishing house in Qinghai, wrote a book with unfavourable comments about the Chinese government. He has been missing since April, and his family believes that he is being detained at an unknown location by Chinese authorities.

The arrests have tried to quell the voices of dissent -- expressed creatively through songs, literature and poetry -- which rose remarkably after the authorities brutally suppressed the 2008 uprising in Tibet.

But political experts are worried about the rising arrests of such intellectuals, artists, writers etc, who have nothing to do with the political system. Many of them are the product of the culture propagated by the Chinese Communist Party, and had more or less accepted the rather flawed political system in the country, says the NYT.

Samrup's arrest and subsequent mockery of a trial has also made stalwarts of the Tibetan community nervous. The influential environmentalist was arrested on extremely flimsy grounds, he was not allowed to meet his lawyer for nearly six months and was allegedly beaten up everyday in custody.

Community leaders warn that if someone as powerful and famous like Samrup can be locked up indefinitely, no one in the small community was safe from the whimsical ways of the Chinese authorities. 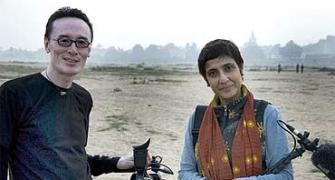 Taking Tibet to the world

'If India wants, it can sacrifice Tibet issue'