Two Border Security Force troopers were on Sunday killed and three others injured in a Naxal ambush in Kanker district of Chhattisgarh, a top police official said, adding an ultra was also gunned down in the incident.

Kanker district Superintendent of Police Rahul Bhagat told PTI on phone that a joint patrolling team of the BSF and the district police from Koylibeda was ambushed near Sulangi village by around 150 naxals in which two BSF jawans -- a head constable and a constable--were killed on the spot while three others, including a special police officer, were injured.

Bhagat said a naxal, suspected to be a commander-level officer, as he was wearing a cap with insignia, was killed in the retaliatory fire by the jawans, adding that the security personnel had recovered a 303 rifle and two IEDs from the spot of the incident.

The district police chief also said the security personnel had claimed that the ultras took away around ten of their comrades who were hit by the police bullets.

Women to be inducted as officers in border forces 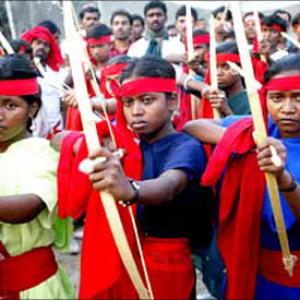 How companies sell in Naxal areas