Chennai train crash: 'First we thought it was a bomb blast'

This sleepy village in Tamil Nadu's Vellore district woke up to the sound of a big bang caused by collision of two trains here with locals initially mistaking it to a 'bomb blast'.

"We all first thought it was a bomb blast. The sound was so deafening. But later we realised that it was a train accident. When I reached the spot, it was dark and smoke had engulfed the area," Chidambaram, a local resident, who was among the first to reach the spot, said.

For daily commuters who travel by the two trains, Tuesday night's accident turned out to be shocking experience as none would have expected that a routine halt at a signal could shatter their return home and land them in hospital.

Nine persons were killed and 72 others injured when the Chennai Beach-Vellore Cantonment Mainline Electrical Multiple Unit train crashed into the stationary Arakonam-Katpadi passenger from behind while it was waiting at the signal in Chitheri.

The impact of the collision was so powerful that three coaches of the stationary train and two of the MEMU train were thrown off the track.

The guard of the stationary train and a station master of nearby Wallajabad, who was on his way to work, were among those killed.

Heaps of mangled metal, broken parts of trains and personal belongings of the passengers were scattered around the spot.

Despite heavy rains and pitched darkness, the national disaster response force personnel and other rescue workers were busy helping people and using gas cutters to prise through the badly damaged bogies.

Both the trains were packed with commuters who travel to Chennai and Katpadi daily for work and vice-versa. Tiffin boxes of the passengers were also strewn around in the area.

Moving scenes were witnessed at the Arakonam Government Hospital where several of the 100 injured had been admitted as anxious relatives thronged looking for their dear ones.

The seriously injured numbering around 25 have been shifted to Chennai, about 100 km from Chitheri.

The driver of the MEMU train was among those injured and was not in a condition to narrate how the mishap took place.

Ramamurthy, 49, an employee of a private firm in Ambattur on Chennai outskirts, who was travelling in the MEMU along with his niece, recounted the tense moments.

"I heard a loud noise but did not know what happened. There was no light and there was smoke all around. First we though it was a bomb blast," he said at the government hospital.

Similar was the experience of Shanthi of Manavaram and her two sons, daily wagers who commute by the train to Chennai. "I heard the sound and in a flash I found myself lying on the track. Then co-passengers helped me," she said. 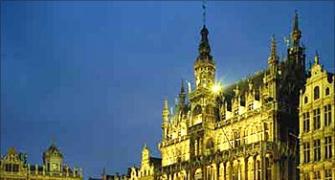 Special: Can the absence of government be a boon? 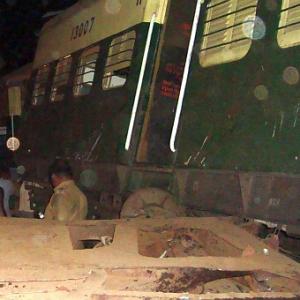