The row over premature retirement of former National Company Law Appellate Tribunal Chairperson Justice Ashok Iqbal Singh Cheema ended in the Supreme Court on Thursday as the Centre conceded, permitting him to continue in office till September 20 to pronounce verdicts, following the warning that the new law on tribunals would be stayed suo motu.

IMAGE: During the hearing, the Supreme Court bench headed by Chief Justice N V Ramana warned the Centre that it would exercise its suo motu power to stay the Tribunals Reforms Act, 2021. Photograph: ANI Photo

The hearing over the premature superannuation of Justice Cheema once reached a point when the bench headed by Chief Justice N V Ramana warned the Centre that the it would exercise its suo motu power to stay the Tribunals Reforms Act, 2021, which was referred to by Attorney General K K Venugopal as empowering statute to retire the NCLAT head.

Justice Cheema, the former chairperson of the NCLAT, was to superannuate on September 20, but Justice M Venugopal was appointed as the acting head of the tribunal with effect from September 11, creating a peculiar situation where the former approached the top court.

However, later K K Venugopal, on instruction from the Centre, apprised the bench, also comprising justices Surya Kant and Hima Kohli, about the changed stand of the government leading to the closure of the row.

"I have taken instructions. It was said he (Cheema) took leave to write judgments. So we have decided that he will be allowed to go to office and pronounce judgments, the current chairperson Justice Venugopal will be sent on leave," he told the bench.

"The submission is accepted and consequential orders will be passed (by the government). The current chairperson will be on leave till September 20 and this order is passed keeping in mind the peculiar facts and circumstances of this case," the bench said.

At the outset, the bench was informed by the top most law officer that 'the government wants him to concede' on the retirement of Justice Cheema.

"Then we will record it and close the case," the CJI observed.

However, the bench got irked after the attorney general made further submissions that the reinstatement of Cheema from September 11 to 20 would be notional only to enable him to get retiral benefits sans actual powers of the office as it will be very 'awkward' to remove the incumbent Justice Venugopal from the post.

"Mr Attorney, tell us, how fair is it? He has some judgments to pronounce. If you retire him, there will be a problem of rehearing those cases. The way these orders were passed was also awkward. If your government thinks they want to stick to that then it's okay," the irked bench observed.

Moreover, the government has the power under the Tribunals Reforms Act to terminate the services, K K Venugopal said, adding that the termination letter was on the new law which overrides the apex court's judgement in the Roger Mathew case.

"Then we will have to stay your (Centre's) legislation (the Tribunal Reforms Act)," the CJI said.

"Let me take the instructions. It will be very awkward for us to remove a person. I am prepared to argue the stay petition also. The government has certain powers," the attorney general said, and sought 30 minutes to get instructions.

When the matter was taken up again, the topmost law officer informed about the changed stand of the government and said that Justice Cheema would be reinstated with all the powers as head of the NCLAT to pronounce pending judgements till September 20 and his predecessor would be asked to proceed on leave till then.

The top court recorded this in the order and closed the case and said, "The attorney general solved the problem. We thank you for this."

Justice Cheema had moved the Supreme Court challenging reduction of his tenure, terming it arbitrary.

The apex court also on Wednesday, in related proceedings, had expressed displeasure over the 'hurried' appointment of Justice M Venugopal as acting chairperson of the NCLAT.

The top court was critical of the fact that Cheema, who was due to superannuate on September 20, was replaced by Justice Venugopal in a hurried manner.

Justice M Venugopal had been appointed as the acting chairperson of the NCLAT, as the key appellate tribunal continued to be without a permanent head now for more than 18 months.

Justice Venugopal had been appointed from September 11, 2021.

He is a former judge of the high court of Madras. He had joined as a sub-judge in Tamil Nadu State Judicial Service on June 5, 1997 and later was elevated to high court in November 2007, where he had served for eleven-and-a-half years.

Justice Venugopal was appointed as a judicial member of the NCLAT on October 23, 2019, and was moved to the Chennai bench of the appellate tribunal on January 16, 2021.

Justice S J Mukhopadhaya, who was the full-time chairperson, retired on March 14, 2020 after serving as chairperson of the appellate body for almost four years.

Last week, the apex court had raised concerns, saying the Centre was "emasculating" tribunals by not appointing officials to the quasi-judicial bodies that are facing staff crunch.

How babus yearn to wear the judicial hat in tribunals 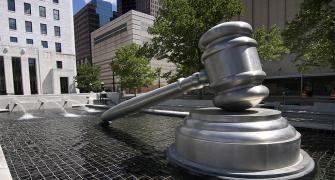