Advocate Prashant Bhushan, who is a member of the newly constituted 10 member draft committee of the Lokpal Bill along with his father Shanti Bhushan, has decided to move a criminal contempt petition in the Supreme Court on Monday.

"I am moving a criminal contempt petition in the Supreme Court against those who have brought out a controversial CD against my father Shanti Bhushan with the intention of maligning his name," Prashant Bushan told rediff.com.

Asked if he is naming former Samajwadi Party leader Amar Singh in his petition, Prashant Bhushan refused to give details of the petition.

"I have no hand in doctoring the CD. You think I would be a foolish enough to add my own voice to the CD if it had been doctored by me," he said in an informal chat.

"He has no choice but to move the court as the reputation of Prashant Bhushan and his father Shanti Bhushan are at stake. This has now come down to a personal level. The chief justice's message, I hope, would bring the judicial house in order," legal luminary Fali S Nariman said when asked about his opinion on the issue.

Last week, while speaking at a seminar, Justice Kapadia had said that corrupt judges should not be given political protection and men in black robes must be clean in order to uphold the integrity and independence of the judiciary.

The chief justice had added, ''The judiciary must also be subjected to fair criticism.'' 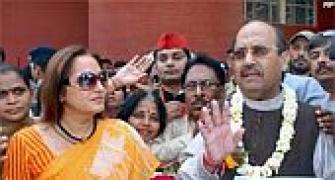