Rashtriya Swayamsevak Sangh leader Indresh Kumar is likely to be quizzed again by the Central Bureau of Investigation0, which is scrutinising documents submitted by him after he faced the agency sleuths recently in connection with the probe into the Mecca Masjid blast case.

Official sources said that Kumar, who has been a member of Rashtriya Swayamsevak Sangh's central working committee for the past four years, was asked to submit a number of documents by the agency including his bank details. Kumar has submitted a set of photocopied documents after he was questioned by CBI at its office in New Delhi on December 23, CBI sources said.

Kumar will submit more documents sought by the agency and is likely to be called again for questioning, the sources said. Kumar had alleged that CBI's move to question him was a "conspiracy" by the Congress and denied any involvement in the case.

"I have been called here under a fabricated story. I have been living a transparent life ever since my birth and association with RSS. I have devoted my entire life to the nation," he had told reporters before entering the CBI office for questioning.

"For the past many years, Congress party and its certain leaders are trying to harm both RSS and my image which has also been exposed through Wikileaks," he had said.

The CBI had earlier this month filed a charge sheet in connection with blast case naming Devendra Gupta and Lokesh Sharma, who were arrested by the Rajasthan ATS for their alleged role in Ajmer Dargah blast case in 2007. All the accused were said to be having links with a right-wing Hindu group.
Source: PTI© Copyright 2021 PTI. All rights reserved. Republication or redistribution of PTI content, including by framing or similar means, is expressly prohibited without the prior written consent.
Related News: CBI, RSS, Indresh Kumar, Mecca Masjid, Rashtriya Swayamsevak Sangh
SHARE THIS STORY
Print this article 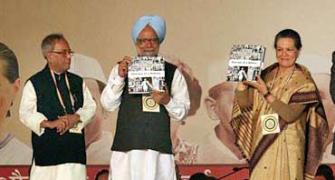 Congress adopts anti-RSS resolution
Congress is out to malign me, says Indresh Kumar
The RSS are Nazis, says Digvijay Singh