A police chowki was burnt, over 20 vehicles torched while several instances of stone pelting and clashes were reported on Tuesday from across Saharanpur, which has been witnessing caste-based based violence since Friday. 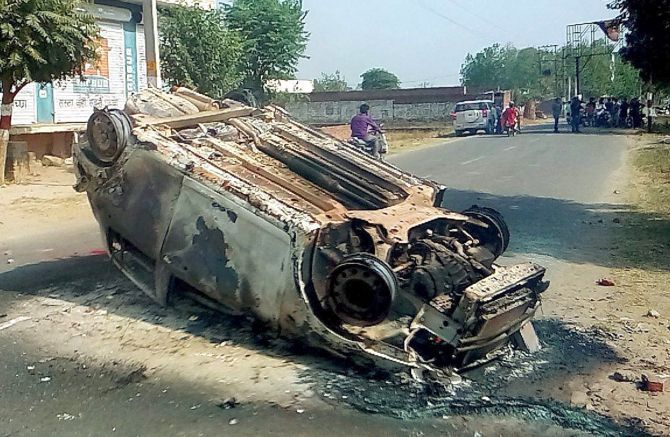 According to police, an organisation of Dalits sought to hold a 'mahapanchayat' on Tuesday in the Gandhi Park to demand compensation and relief for those affected in an inter-caste clash last week.

Senior Superintendent of Police Subhash Chand Dubey said that the district administration had not permitted any such gathering.

Police acted against the people gathered for the 'mahapanchayat' which led to tension and a stampede-like situation, it is learnt.

As the news of the police action, tension spread and there were several incidents of violence, including against cops and mediapersons in the district.

Police teams including the PAC rushed to the spot and they too were pelted with stones. A police 'chowki' was set ablaze while several police vehicles were damaged.

Protesters also blocked Chakrota road near Nazirpura while a building was burnt down on the Malhipur road.

The situation in the district continued to be tense and there was heavy police deployment. Top police and state administration were monitoring the developments while fire tenders rushed from spot to spot to put out flames.

Last week, one person was killed and at least 15 others, including a police officer, were injured as members of two castes clashed over loud music being played during a procession.

Around 20-25 youths of upper caste Thakur community from Shabbirpur village were on their way to Simlana village under Badgaon police station to take part in a function to garland the statue of Rajput warrior-king Maharana Pratap, when the Dalit locals objected to the loud music being played by them.

A police report sent to the state headquarters here said the Dalits objected to the "raucous" celebration, triggering an exchange of words.

It soon snowballed into a full-blown clash with both the groups throwing stones and bricks at each other, it added.

The Dalits asked the percussionists to turn off the music blaring out of loudspeakers as they passed by a Ravidas temple.

The incident led to more violence and there was brickbatting and arson, while 15 to 20 Dalit houses were torched and many vehicles including those of the police, torched.

As many as 16 persons, including a police officer, were injured in the resulting clashes. Of them, Sumit Rajput, 35 later succumbed to his injuries.

Seventeen people were later arrested in connection with the violent clashes, police had said.

IMAGE: A damaged car after a clash  in Saharanpur on Tuesday. Photograph: PTI Photo