Who derailed the Ghani Khan Express? 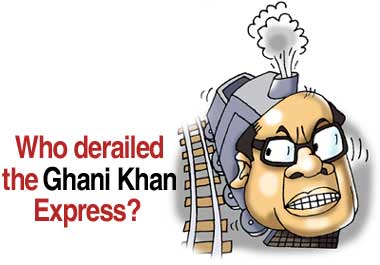 Remember A B A Ghani Khan Choudhary? The veteran Congress MP from Malda and former Union railway minister is seething at his exclusion from Manmohan Singh's Cabinet. And he blames it on the 'coterie' around Sonia Gandhi.

Mukherjee and Dasmunsi are supposed to have teamed up with the high-profile Ghulam Nabi Azad to deny Choudhary what he deemed his rightful prize. Apparently, Azad, parliamentary affairs minister, played along because he did not want competition as the most senior Muslim representative in the Cabinet.

Mukherjee, who successfully contested his maiden election to the Lok Sabha from Jangipur, polled a sizeable number of Muslim votes thanks to the campaigning in his favour by the Malda strongman. Yet, when it came to the selection of ministers, Choudhary believes, Pranabda did not do enough to ensure his inclusion.

Choudhary, however, is a loyal Congressman and is unlikely to precipitate the issue.

Admittedly, though, he is not the only one feeling let down by the leadership. Suresh Kalmadi, newly elected MP from Pune, Maharashtra, was honest enough to confess as much at a recent dinner where Priyanka Vadra and her husband Robert were also present.

When a Page 3 regular told Kalmadi that he was surprised not to see him become a minister, Kalmadi, within Priyanka's earshot, answered, "I wouldn't say I am not sad at my exclusion. After all, I have been in Parliament now for 23 years and wanted to be a minister..."

Priyanka preferred to keep her counsel.

For Tytler, 'I' is for Investment

Jagdish Tytler, Lok Sabha member from Delhi Sadar and now minister for non-resident Indians, must be suffering from a terrible inferiority complex. Why else would he break into an unprovoked lecture on the supposed importance of his new charge every time someone greets him?

Once a high-profile minister for civil aviation in Rajiv Gandhi's government, Tytler would have you believe that the prime minister, no less, has told him that his is a ministry for investment, now that the ministry for divestment has been shut down, and that it is his task to attract investment from cash-rich NRIs.

If that still fails to convince you of Tytler's worth in the government, fresh proof is at hand: he has found office space in South Block, which, if you didn't know, houses the office of the PM himself! 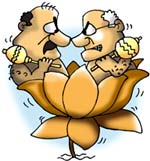 The BJP leadership does not seem to have learnt any lessons from its stunning defeat in the recent parliamentary election.

Factionalism runs deep in the once disciplined party, and the fault lines are only widening with the inevitable blame game after the loss of power.

BJP president M Venkaiah Naidu is not exactly Atal Bihari Vajpayee's darling. The former prime minister only tolerates him because a. he enjoys the complete confidence of former deputy prime minister L K Advani, and b. the laidback Vajpayee has always shrunk from forcing an issue.

But a few churlish individuals masquerading as defenders of the former PM's interests have started inspiring reports against Naidu. Elements in the media hostile to the BJP lap it all up, with one journalist going to the extent of calling the BJP chief a 'lout' in print -- something sober newspapers normally refrain.

These short-sighted Vajpayee defenders have but one goal: blame Advani for every crime under the sun, condemn the BJP for all the wrongs in the world, but say good things about Vajpayee. Little do they realise that Vajpayee can only be as good as the organisation he belongs to. Besides, it is too late to detach himself from it now.

Sniping against the entrenched Advani group has also begun from the minuscule Murli Manohar Joshi camp. Joshi aspires to play a more dominant role in the organisation, now that he has failed to retain his Allahabad Lok Sabha seat. He has been openly critical of Advani and Naidu and feels encouraged by Vajpayee's ambivalence towards the BJP chief and his patron.

The RSS leadership is unable to call this internecine warfare to a halt because over the years its own stature has shrunk while that of the BJP brass has grown, particularly owing to the party's recent stint in power.

Meanwhile, despite all the rumours and insinuations against him, Naidu appears set to survive as the BJP chief.

Queueing up for the Upper House

India's former ambassador in Washington Lalit Mansingh is still in contention for the lone seat the BJP is certain to win from Orissa in the forthcoming biennial election to the Rajya Sabha.

But one who is almost certain to get a nomination for the Rajya Sabha from the BJP is Brajesh Mishra. The former principal secretary to the prime minister is to be rewarded for his loyalty to Vajpayee and his foster family. In all probability, he will be elected from his home state, Madhya Pradesh.

Another keen contender for a Rajya Sabha seat is Arun Shourie. The former divestment minister is considered something of an interloper by the BJP rank and file, but has gained the confidence of senior leaders of the party, especially Vajpayee, and they are likely to help him get another six-year term in Parliament.

Shourie, elected to the Rajya Sabha last time from Uttar Pradesh, may now be accommodated by Madhya Pradesh Chief
Minister Uma Bharati. Though something of a loner, Shourie is certainly good at working the system to get what he wants.

Dharam 'garam' with MPs too 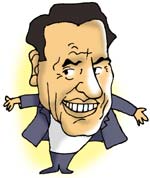 Yesteryear's Bollywood star Dharmendra was surprised by the effusive welcome he was accorded by members of Parliament cutting across party lines on the first day of the new Lok Sabha.

The Jat hero of many a Bollywood blockbuster was virtually mobbed by fawning fans when he came to the Central Hall of Parliament. Members young and old, male and female, vied with one another to introduce themselves to 'Garam Dharam', who was elected on a BJP ticket from Bikaner, Rajasthan.

A while later, when Sunil Dutt, veteran actor, Congress MP and now minister, sauntered in and greeted Dharmendra on his maiden victory, Babbar, Khanna and Jaya Prada stood up to congratulate "Duttsaheb" on being appointed minister for sports and youth affairs.

The one Bollywood star missing from this picture-book ensemble was 'Hero No 1' Govinda, who had got into the Lok Sabha trouncing Ram Naik, the former petroleum minister.

A question for the Marxists

Apropos of the controversy over the inclusion of Laloo Prasad Yadav and other tainted politicians in the government, the ruling United Progressive Alliance's counter that Leader of the Opposition Advani and colleagues like Murli Manohar Joshi were in the same boat because they too faced charges of criminal conspiracy for their role in the demolition of the Babri Masjid in Ayodhya back in December 1992 is bound to meet a sharp riposte from the NDA benches.

Here is a warning: Laloo and his defenders in the Congress and the Left must bone up on modern history. They should be prepared to answer: 1. whether the massive bloodbath and wholesale destruction that accompanied India's Partition in 1947 was a criminal act, and, if so, who was responsible for it; and 2. since millions were lynched when the Marxists' Great Helmsman, Mao Zedong, assumed power in China in 1949 and, later, when he launched his Cultural Revolution in 1966, whether they consider him the biggest mass murderer in living history or a great revolutionary.

Watch out for an interesting debate in Parliament these coming days.