That she is a popular leader cannot be disputed.
But equally indisputable is her brand of whimsical politics.
One reason everyone is a little wary of coming together under a banner led by Banerjee, reports Aditi Phadnis. 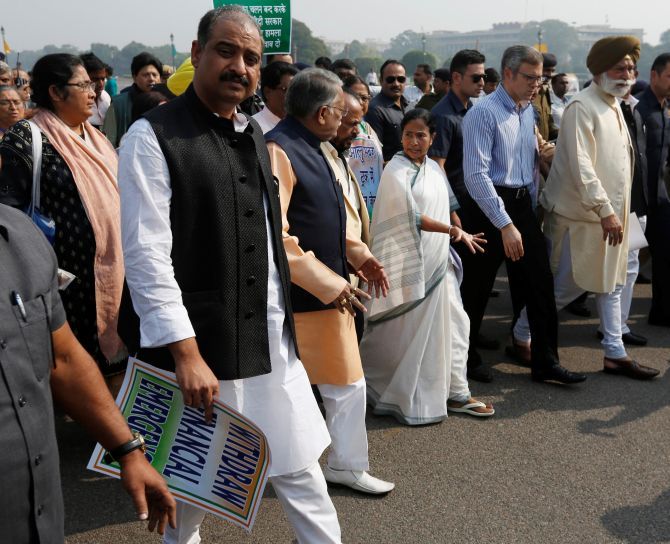 So is Mamata Banerjee the heroine of demonetisation?

She was the first to unambiguously criticise the move, she followed it up with a fervent effort to unite the Opposition around the issue of inconvenience to ordinary people, and when no one came, then with Arvind Kejriwal's party on one side and the National Conference on the other, marched to Rashtrapati Bhavan and the Reserve Bank of India to slam the move, doing what she is best at: Street protest.

Obligingly, the Bharatiya Janata Party came to know of it and there was a stand-off: And it was led by Mamata.

To be honest, there are not many like her around any more: Totally un-self-conscious about rabble-rousing and with a completely transparent eye to the main chance.

It brings the old days back.

November 25, 1992: Mamata Banerjee, then president of the West Bengal unit of the Youth Congress, organised a rally at Kolkata's Brigade Parade Ground to launch a movement against the Communist Party of India-Marxist's long rule in the state.

The crowd that attended was impressive and it cheered her enthusiastically as she proceeded to sound the symbolic 'death knell' of the state government from the dais.

This support moved her so much that she announced, then and there, that she would quit her post as junior minister in the Narasimha Rao government (she was in charge of youth affairs and sport) and devote her energies full-time to building an anti-Left Front movement.

Rao was, naturally, livid that a junior minister had put him in such an embarrassing position by making a public announcement before informing him.

The dramatic public announcement came to nothing; she did not resign from the Rao ministry. Nor was it the first time she displayed such selective amnesia.

Earlier the same year she had said she would resign her ministership when she was defeated by colleague Somen Mitra in elections for the post of president of West Bengal Pradesh Congress Committee. She forgot to follow up on this too. Her current leadership spell draws on three premises: Elections to five state assemblies will be held in the next few months and could shift the tide of public opinion away from the BJP, seeking an option in the Opposition; there is currently a vacancy for the leadership of the aforementioned Opposition; and the rest of the Opposition is a bunch of lily-livered cowards.

There is only one problem: The mover of the resolution is Mamata Banerjee.

That she is a popular people's leader cannot be disputed. But equally indisputable is her brand of whimsical politics.

After she became chief minister of West Bengal, Banerjee's hold on her party is such that leaders know they must indulge her every whim, or face a fall from grace.

This leads to unforeseen consequences, as several leaders who thought they had a brilliant political future discovered after they were dumped by Banerjee -- for not listening to Rabindra Sangeet with the right degree of concentration (Banerjee was singing) or for not taking medicines she had prescribed (she fancies herself as a doctor), for example.

And so, while bitter rivals Congress and CPI-M could sink their differences and come together, everyone is a little wary of coming together under a banner that is led by Mamata Banerjee.

But then you could argue that an all-in Opposition unity as a banding together of all anti-BJP political parties is a proposition that will be put to test only next year, so the idea still has time to evolve.

The election to the President of India is due end of June/beginning of July next year. By then several state assembly elections including Uttar Pradesh will have been completed.

Will there be an election?

It seems unavoidable at this point, given the fractious relationship between the Congress and the BJP.

Will other Opposition parties -- including Mamata Banerjee -- accept a common Opposition candidate and work towards respectable numbers for him/her?

In a Presidential election, MLAs and MPs are voters, an electoral grouping which comprises 4,896 members.

According to the BJP, the National Democratic Alliance has around two per cent more votes than a majority. The party feels this percentage will increase after the election in the five states.

The value of votes for a UP MLA is more than the value of MLAs from any other state -- to be precise, the value of one UP MLA vote is 208 and the total value of the state’s votes is 83,824.

At present, there are only 41 BJP MLAs in the UP assembly. Unless this number goes up, the BJP could be in perilous waters.

All this is speculative at this point.

Union governments in power have a huge capacity to dole out patronage, win friends and influence people in an election of this nature.

But Mamata Banerjee is setting the stage. The question is: What will she get out of it? 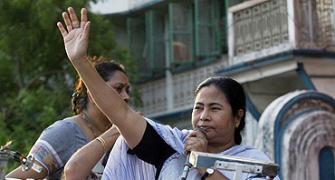 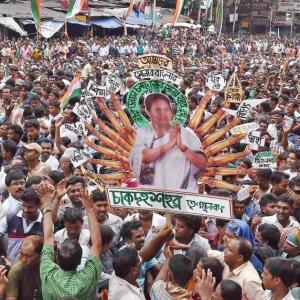 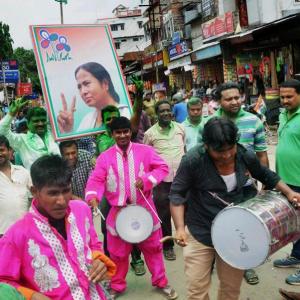