In the years to come, Dushyant may need to compete for the leadership of the Jat community with Hooda’s son Deepender, and other Jat leaders, reports Archis Mohan. Among his followers, Dushyant Chautala is known as a risk taker.

Last December, he risked the ire of his uncle when he split from the Indian National Lok Dal to launch the Jannayak Janata Party.

The gamble succeeded, with the new outfit winning 10 seats in the Haryana assembly polls.

However, he risked his nascent political career to form a coalition government with the BJP.

At 31, he became the youngest deputy chief minister of Haryana, and has sparked hopes of inheriting the legacy of his great grandfather -- the Jat stalwart Devi Lal.

However, the JJP’s alliance with the BJP also gave ammunition to the Congress -- which, under Bhupinder Singh Hooda, commands allegiance of the majority of Jats -- to attack it for being the BJP’s “B team”.

In the years to come, Dushyant may need to compete for the leadership of the Jat community with Hooda’s son Deepender, and other Jat leaders.

The decision to align with the BJP has the potential to both make or break his career.

Fluent in English and having not lost his earthiness, he is known as the “gentleman Chautala” among his followers.

He studied at Lawrence School in Sanawar (Himachal Pradesh), and graduated in business administration from California State University.

He also has a law degree.

In December, Dushyant and his father, Ajay Chautala, walked out of the INLD -- the party of his grandfather Om Prakash Chautala and great grandfather Devi Lal.

Dushyant was unmoved amid attempts by some ‘khaps’ and former Punjab CM Parkash Singh Badal -- a family friend of the Chautalas -- for reconciliation.

The JJP debuted in the electoral arena by contesting the Jind by-poll.

Its candidate Digvijay Chautala, Dushyant’s younger brother, lost to the BJP but pushed the Congress’s Randeep Singh Surjewala to third.

The JJP then fought on seven seats in the 2019 Lok Sabha polls, leaving three for the Aam Aadmi Party.

He decided to go solo when the alliance did not materialise.

The JJP succeeded in supplanting the INLD, which won only one seat in comparison to the JJP’s 10, and secured a paltry 2.44 per cent vote share versus the JJP’s nearly 15 per cent.

He had made headlines in 2014, after becoming the youngest member of the Lok Sabha at 26.

“Name in Limca Book of Records as the Youngest Ever Elected Member of Parliament of India”, his profile on the Lok Sabha website states.

During his tenure, Dushyant impressed with his well-prepared speeches, and cogent interventions on a wide array of issues.

He asked 677 questions on railway and highway projects, crime against women, child labour, and drug trafficking.

To highlight farmers’ concerns, he drove a tractor to Parliament in 2017.

As a public representative, Dushyant says he has organised blood donation camps, awareness about organ donation, and tree plantation drives.

He has also reached out to other castes in Haryana to be seen as a leader not just of Jats but all the “36 biradari” of the state.

Recalling his journey over the last five years, he says: “There has been a lot of change. I had to leave my education and get into politics, and today I am leading a party. It requires drastic effort and big changes.”

He sees himself as a farmer leader who can fill his great grandfather’s shoes, and invokes his memory in all his public meetings.

The tractor featured on the polling day too.

Along with wife, Meghna, and MLA-mother, Naina Chautala, he rode one to cast his vote. 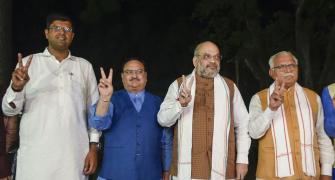 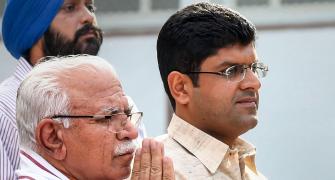 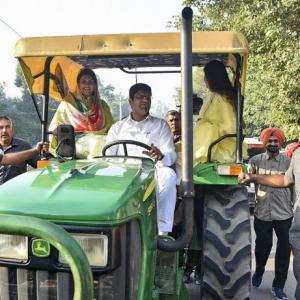