Union home minister Amit Shah on Saturday said that he will be meeting Meghalaya chief minister Conrad Sangma to find a way to resolve issues of the state over the Citizenship (Amendment) Act, which seeks to grant citizenship to non-Muslim refugees from three countries in India's neighbourhood. 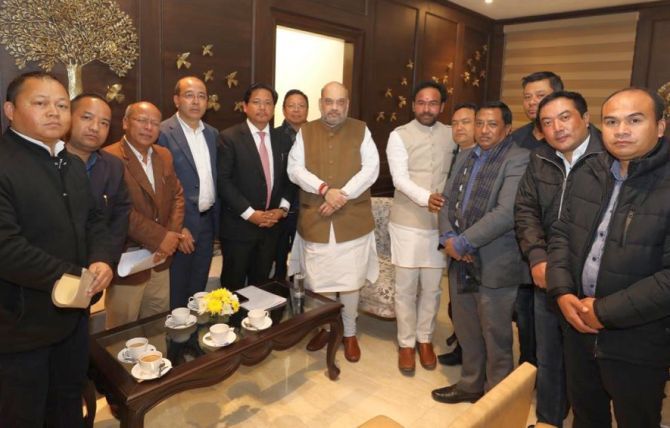 IMAGE: Home Minister Amit Shah in a meeting with a delegation of Meghalaya Democratic Alliance led by its chairman and chief minister Conrad Sangma in New Delhi. Photograph: @SangmaConrad/Twitter

Shah said Sangma and his cabinet ministers met him on Friday to discuss the issue.

"Sangma ji and his colleagues said there is a problem in Meghalaya. I tried to make them understand that there is no issue. Yet, they asked me to change something (of the Act). I asked Sangma ji to come to me when he is free after Christmas and we can think constructively for a solution for Meghalaya. There is nothing to fear," Shah said while speaking at a public rally in Jharkhand's Dhanbad.

"We came up with the Citizenship (Amendment) Bill. The refugees, including the Hindu, Buddhist, Christian, Parsi and Sikh communities, who came to the country fleeing religious persecution, were living a miserable life. They did not get proper food, jobs and access to medical care. Should they be made citizens or not? The Congress says this is anti-Muslim. They call us anti-Muslim when we brought triple talaq, did surgical strikes and now the CAA. But you (Congress) only want to incite violence in the Northeast," he said.

"I want to say to you, Assam and Northeast, that Prime Minister Narendra Modi-led government has the responsibility to protect and preserve the language, culture, social identify and political rights of the people," he said.

The chief minister of Meghalaya had met Shah late on Friday night urging the Central government to implement Inner Line Permit in the state.

"MDA Govt delegation called on Hon'ble Home Minister @AmitShah ji around 12:30 am today in Delhi to urge the central Govt to implement Inner Line Permit (ILP) in Meghalaya. The State Govt will convene a one day special session to bring in Govt resolution to implement ILP," Sangma had tweeted after the meeting.

The Citizenship (Amendment) Act seeks to grant Indian citizenship to refugees from Hindu, Sikh, Buddhist, Parsi and Christian communities fleeing religious persecution from Pakistan, Afghanistan, and Bangladesh and who entered India on or before December 31, 2014.

However, the Act will not apply to areas covered under "The Inner Line" notified under the Bengal Eastern Frontier Regulation, 1873.

"Nothing in this section shall apply to tribal area of Assam, Meghalaya, Mizoram or Tripura as included in the Sixth Schedule to the Constitution and the area covered under "The Inner Line" notified under the Bengal Eastern Frontier Regulation, 1873," read a Gazette notification.