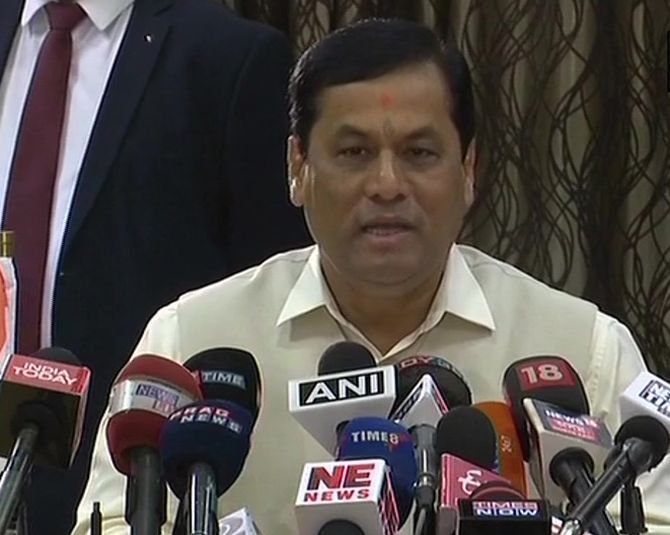 Allaying fears over the Citizenship (Amendment) Act, 2019 (CAA), Assam Chief Minister Sarbananda Sonowal on Friday said he invited leaders of anti-citizenship law agitation for talks and that his government was committed to work for the best interests of its people.

Addressing a press conference in Guwahati, Sonowal gave assurances that he would not allow anyone to harm the rights and honour of the state's indigenous population.

The chief minister also clarified that no one would be able to move to Assam from Bangladesh by means of the amended Citizenship Act.

"Assam will always remain for the Assamese. No person from Bangladesh will be able to come to Assam through the Citizenship (Amendment) Act. Only those staying among us for decades (having fled Bangladesh) due to religious persecution can apply for Indian citizenship," he stated.

The chief minister insisted that the number of applicants would be 'negligible'.

"When the process of filing application for citizenship will be over, a list will be published... People will then find out if my assertion that the number will be negligible is correct or wrong," Sonowal said.

The CM sought to remind people that he had once moved the Supreme Court to protect their rights.

"For you, I had gone to the Supreme Court. Don't think I am any different from you. I am with you," he said.

Sonowal had in early 2000s moved the apex court seeking revocation of the controversial Illegal Migrants (Determination by Tribunal) Act and Rules. The court had
struck down the IMDT Act as unconstitutional.

"Assamese language will be protected as state language forever. People's rights will be secure. Nobody can take away their land, honour and political rights. I was made the chief minister to ensure their development. I assure you no one can steal the rights of the sons of the soil," he claimed.

Asserting that a Special Investigation Team would probe every case related to the violent protests over the citizenship law, the chief minister said he invited leaders
spearheading the agitation for talks.

"I have invited the leaders of the anti-citizenship law agitation for talks across the table as I believe through discussions everything is possible. I have extended our
invitation through the chief secretary. Together we can chalk out a solution, a way out..." Sonowal clarified.

Maintaining that a section of people were misleading others by claiming that 1.5 crore refugees from Bangladesh 'will be settled in the land of the indigenous people of
Assam', Sonowal said, "It is false propaganda. Those spreading such misinformation will soon be exposed."

"It is certain that granting of citizenship cannot have any impact on our social construct. Clause 6 of the Assam Accord grants constitutional, legislative and administrative safeguards to protect, preserve and promote the cultural, social, linguistic identity and heritage of the Assamese people," he said.

The CM pointed out that the amended Citizenship Act was a 'national commitment' and there was no political motive behind its implementation.

"Do not doubt us and distance us from you. We are all united. Come forward to solve Assam's problems through discussions," the CM iterated.

Describing those that unleashed violence in the state during the anti-CAA protests as 'enemies of Assam', he said, "Their only agenda is to grasp power by disturbing peace."

On a delegation of BJP MLAs calling on him and urging him to allay fears and doubts regarding the amended law, Sonowal said, "I am happy they upheld their responsibility and apprised me of people's concerns in their respective constituencies. I thank them."

Violent protests had erupted in the state after the Rajya Sabha last week passed the Citizenship (Amendment) Bill, forcing the administration to impose curfew on several trouble-torn areas, including Guwahati and Dibrugarh.

With the situation now returning to normal, curfew has been lifted or relaxed and mobile internet services restored in the cities and towns.

Source: PTI© Copyright 2021 PTI. All rights reserved. Republication or redistribution of PTI content, including by framing or similar means, is expressly prohibited without the prior written consent.
Related News: Assam, CAA, Sarbananda Sonowal, Bangladesh, Assam Accord
SHARE THIS STORY
Print this article