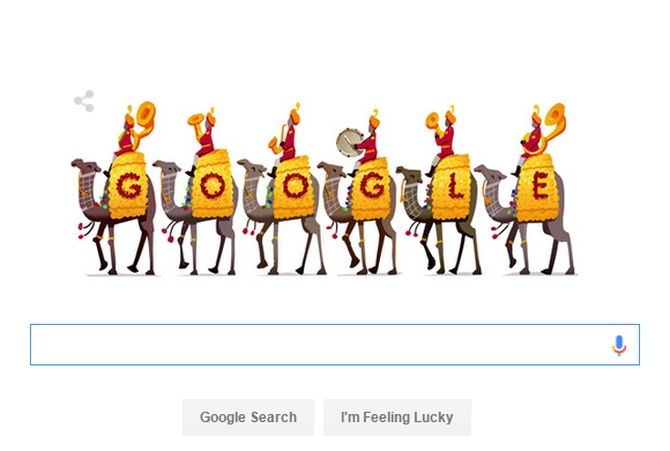 As a tribute on 67th Republic Day, search giant Google's doodle on Tuesday showed a march of a richly caparisoned camel contingent of the Border Security Force, a major attraction at the annual parade at the Rajpath on January 26.

The doodle presents six colourfully bedecked camels with bandsmen riding their back and playing martial music, marching elegantly in one neat row as they do on the  ceremonial boulevard.

Each of the six camels carries a letter of the word 'Google' on their golden caparison.

The BSF is the only force in the country to have these majestic and elegantly dressed four-legged animals for both operational and ceremonial duties.

They are used by BSF personnel for patrolling along the Thar Desert running along the Indo-Pak International Border in Rajasthan. The 90-camel contingent, 54 with troops and the rest with band personnel, first became part of this national festival celebration in 1976 after it replaced a similar squad of the army which had been participating in the Republic Day parade since it first took place in 1950.

Incidentally, the contingent this year were made to skip the Republic Day dress-rehearsals initially, sending out a signal that they won't be part of the annual parade, but  the contingent were brought in for the exercise a few days before the grand event where French President Francois Hollande is the chief guest.

According to tradition, the lead camel contingent on Republic Day showcases smartly dressed and large-moustached and armed BSF border guards, the second follows with  bandsmen in beautiful multi-colour dresses on the back of the camels playing martial music.

The BSF camel contingent is the inheritor of the heritage of the Bikaner Royal Camel Force, known as 'Ganga Risala', and is based in the border town of Jaisalmer in  Rajasthan.

Every year it travels to Delhi in November to participate in the Raising Day event of the BSF on December 1 and the Republic Day parade after which it retreats to its base.

The contingent is much sought after for ceremonial duties rendered by the government protocol to greet and honour foreign heads and dignitaries many times in the past and was present for welcoming US President Barack Obama at the last Republic Day parade and for entertaining the guests during the Afro-India summit held last year.

Google had marked the 65th Republic Day with a doodle featuring 'Jaanbaaz', BSF's motorcycle daredevils who delight the crowd at Rajpath every January 26, in their famous pyramidal formation.