Surveys suggest that the AAP would win 40 seats in the 182-member assembly if elections are held tomorrow, reports Aditi Phadnis. 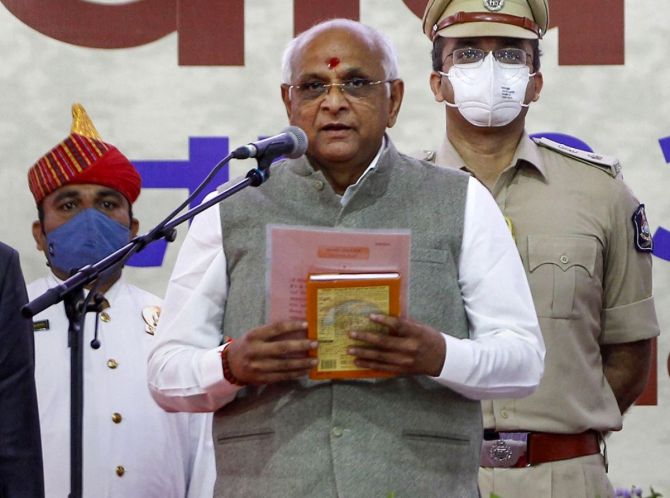 Few in Gujarat have heard of Bhupendra Patel. That's his greatest strength. "His value lies in the fact that no one knows him," an experienced observer of Gujarat politics remarked.

As high flyers and heavyweights in the Bharatiya Janata Party in Gujarat found themselves wringing their hands, a relative non-entity -- a first-time MLA, who has no experience in running a government department -- pipped them to the post of chief minister.

Reports filtering out from the legislature party meeting suggest that when he was informed he was chosen the CM of one of India's wealthiest states and was asked to address the meeting, he was so overcome that he could not speak.

Bhupendra Patel, however, has a double advantage which should act as a protective cover around him.

He is the protégé of former Gujarat chief minister Anandiben Patel (he served as her campaign manager and later contested the seat that she vacated when she became governor), and has the support of Union Home Minister Amit Shah.

His assembly seat, Ghatlodia, is one of the segments of the Gandhinagar Lok Sabha constituency that Shah represents.

Patel won this seat in the last election by a margin of over 115,000 votes, outstanding by any yardstick for an assembly poll.

Cast somewhat in the mold of Narendra Modi -- in 2001, Modi, too, found himself catapulted to the top job though he had no administrative experience -- Bhupendra Patel has another major advantage.

When Modi replaced Keshubhai Patel, supporters of the powerful Patidar caste had come out against him, all guns blazing that a member of the backward caste Teli, unknown in the rest of Gujarat, had managed to snag the top job.

Bhupendra, however, is a Patel from the Patidar community, though it is doubtful if the Patidars beyond Ahmedabad will consider him as their man.

In appointing Bhupendra Patel, the Bharatiya Janata Party has clearly bowed to caste pressure. The Patidars in Gujarat are as powerful in Gujarat politics as the Marathas in Maharashtra, an observer said.

The early Patidar leadership under Sardar Patel was staunchly loyal to the Congress. The first four chief ministers of Gujarat were all Brahmins.

In 1973, Chimanbhai Patel raised the flag of rebellion and he became the first Patidar chief minister but from the Congress. However, he could not consolidate the Patidar base.

Much later, another Patel became deputy chief minister and soon the unchallenged leader of the Patidars -- Keshubhai, who was instrumental in bringing Patidars over to the BJP.

The movement started from Saurashtra, shifting the centre of Patidar leadership from central Gujarat to Saurashtra.

This coincided with the rise of diamond polishing as an industry in Surat. Most were the immigrants from Saurashtra. Money power and political power came together and thus began a phase of Patidar dominance that was responsible for the BJP's development and growth in Gujarat -- until Modi came into the picture.

The resistance and resentment to Modi's rise were defused over time partly because of Anandiben's influence: She was identified as Modi's lieutenant and Patidars grew confident gradually that their dominance would continue. Anandiben was appointed chief minister in 2014, after Modi's Lok Sabha victory.

But when she was replaced with Vijay Rupani, a Jain, and not Nitin Patel, Patidars showed their anger by backing the Aam Aadmi Party.

The primary opposition to the BJP in Gujarat currently is not the Congress but the AAP. Internal surveys suggest that the AAP is poised to get as many as 40 seats in the 182-member assembly if elections are held tomorrow.

Little wonder then, that one of the senior-most leaders of the BJP in the state, Nitin Patel, also a Patidar, has never hidden his ambition to become the CM.

In fact, while speaking on the 2020-2021 state Budget, Virji Thummar, the Congress MLA from Lathi (Amreli), said, 'The health minister, who is also deputy chief minister (Nitin Patel), is doing a good job and we support him. But his own party does not.'

'I make him an offer: Defect to the Congress, along with 15 other BJP members and we will be ready to make you the chief minister of Gujarat.' This was a clear and present threat.

In the 182-member assembly, the BJP has 112 seats and the Congress 65. The BJP immediately defended Nitin Patel and said the Congress was dreaming. Rupani, however, was quiet then. But the community had made its mind known.

Bhupendra Patel, therefore, will have to manage community rivals. More than that, with no experience in governance and limited support from his community, he will also have to prove that he is no pushover -- to both bureaucracy and his party.

Will Delhi run him? Or will he be his own man? He will discover soon enough that he is swimming in a sea of sharks. 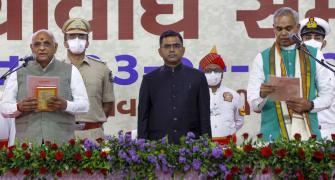 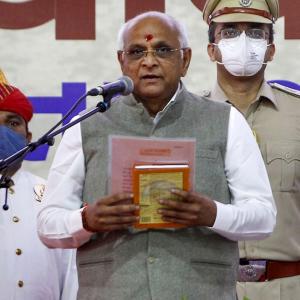 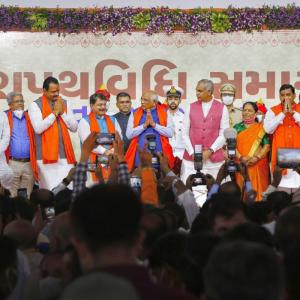