The Asom Gana Parishad, an ally of the ruling Bharatiya Janata Party, would file a petition in the Supreme Court praying for revocation of the amended Citizenship Act, party leader Kumar Deepak Das said on Sunday. 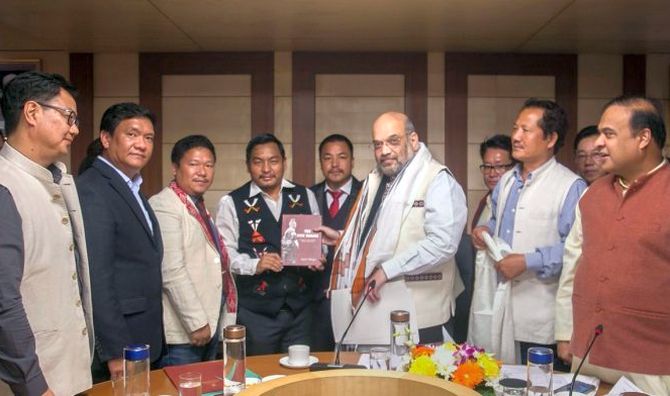 He asserted that the AGP respected the sentiments of common people, who were wary that the law might threaten their identity and existence.

"We will take the legal route to seek revocation of the amended Act as the indigenous people of Assam are apprehensive that their identity, language might come under threat," Das, a former Rajya Sabha MP said.

Sources said a delegation of the AGP, led by Das, would leave for Delhi to file the plea in the apex court as PILs seeking revocation of the Act were scheduled to be taken up for hearing on December 18.

Former AGP minister Prafulla Kumar Mahanta, who had been vocal about his opposition to the amended Act, claimed the party never adopted any resolution supporting the law.

He urged the AGP leadership to clear its stand on the contentious matter.

Dissidence had been brewing in the AGP after party chief Atul Bora said if the Centre "wants to bring the Bill, he cannot do anything about it".

AGP member in Rajya Sabha, Birendra Prasad Baishya, had voted in favour of the legislation.

The regional party has seen a spree of resignations, primarily from district-level bodies, over the issue.

Mahanta, however, claimed Bora's views were "personal" and had nothing to do with the party.

"Being a regional party, we cannot go against the interests of indigenous people. Views expressed by Bora had nothing to with the party's stance on the Act," he claimed.

Earlier in the day, AGP workers held demonstrations outside the party headquarters in Ambari area of Guwahati, demanding resignation of Baishya, party president Atul Bora and two other ministers.

Senior AGP leader Brindabon Goswami urged party workers to "ensure that the aspirations and sentiments of the Assamese people are honoured and the law revoked".

"What is the point of filing a petition against the amended Act now after the party MP voted in its favour?" Goswami contended.

During the previous tenure of the BJP, Bora, who is also the state agriculture minister, and two AGP ministers had resigned from Sarabananda Sonowal-led government over the Citizenship (Amendment) Bill, which had later lapsed as it could not be taken up for discussion in the Rajya Sabha.

They had later withdrawn their resignations, in view of "changing circumstances".