At a rally on the occasion of the BJP’s 38th Foundation Day, the BJP president expressed confidence that his party would win the 2019 polls, “not by giving hollow assurances but on the basis of work done by the Modi government”. Bharatiya Janata Party president Amit Shah on Friday made stinging remarks against the opposition parties trying to unite to take on the BJP in next year’s Lok Sabha polls by equating them to ‘snakes’, ‘mongoose’, ‘dogs’ and ‘cats’.

Later, he said his intention was not to equate Opposition parties to animals.

Addressing a rally in Mumbai, he also asserted that the Modi government will not scrap the reservation policy nor allow anyone else to do so.

“The countdown for 2019 (polls) has begun. Attempts are being made for opposition unity. When huge floods occur, everything is washed away. Only a ‘vatvriksha (banyan tree) survives and snakes, mongoose, dogs, cats and other animals climb out to save themselves from the rising waters.

“Due to Modi flood, all cats, dogs, snakes and mongoose are getting together to contest polls,” Shah said.

He was apparently referring to the efforts being made by various parties like the Telangana Rashtra Samithi, the Trinamool Congress and the Telugu Desam Party to sew up a coalition to take on the Modi-led BJP in the next general elections.

Later, addressing a press conference, Shah said, “What I meant was political parties having no ideological similarities are coming together out of fear of Modi.”

He was responding to questions over his remarks.

Earlier, in his address at the rally on the occasion of the BJP’s 38th Foundation Day, Shah expressed confidence that the BJP will win the 2019 polls, “not by giving hollow assurances but on the basis of work done by the Modi government.”

He also accused the Opposition of not allowing the Budget session of Parliament to function. The session concluded on Friday.

During his speech, he asserted that the BJP government would not scrap the reservation policy, nor allow anyone to do so.

He singled out Congress president Rahul Gandhi for his stinging attack. 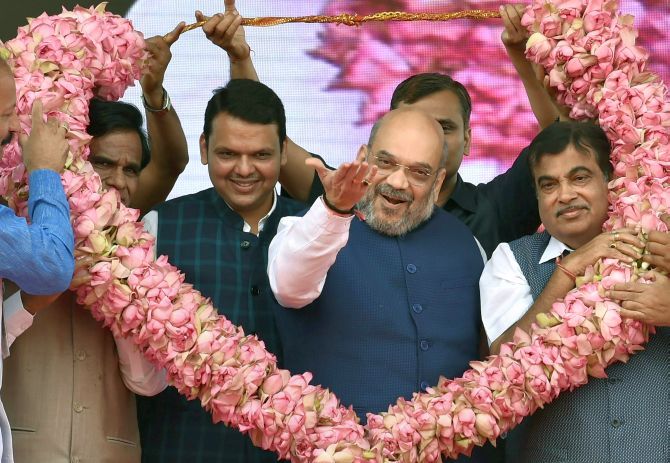 The BJP president’s remarks came in the backdrop of the recent controversy and agitation after a Supreme Court ruling regarding the SC/ST (Prevention of Atrocities) Act, which is seen by many as dilution of the law.

The BJP chief said although his party lost the two Lok Sabha seats of Gorakhpur and Phulpur in Uttar Pradesh, under Modi’s leadership, “we snatched your (Congress’s) 11 governments”.

He said at present, 70 per cent of the country’s population was having BJP rule.

“I was listening to Rahul baba (Rahul Gandhi). He sits with Pawar sahab (NCP chief Sharad Pawar) nowadays. Pawar sahab has given him some ‘injection’,” Shah said.

“Rahul baba says the Modi government should give an account of its four years in power. But people ask you (Rahul) the account of four generations of your party’s dynastic rule,” he said.

Shah said the Congress had all along ignored the demands of the farmers but the Modi government has decided to give one and a half times the production cost of rabi and kharif produce to farmers.

“Ever since Independence, nobody but Narendra Modi has done so,” the BJP chief said.

On the Parliament session being washed out, Shah said, “We were ready to address all issues in the Parliament. It was the Opposition that disrupted the proceedings.”

Responding to the statement by Leader of the Opposition in the Rajya Sabha Ghulam Nabi Azad that the BJP was running away from discussing burning issues, Shah said he was ready for any debate on any issue, anywhere.

“You decide the venue, I am ready for a debate. We are not scared of discussing anything. We have nothing to hide,” he said.

“We are in politics for betterment of people. The Modi government is on the same path,” Shah said.

He said the BJP had grown manifold from a party of 2 MPs to 330 MPs, with full majority in Parliament.

“BJP is the party whose maximum workers have sacrificed for India’s freedom,” Shah said.

“When Atal ji (former prime minister Atal Bihari Vajpayee) founded the party in Mumbai 36 years ago, he had predicted that the ‘lotus’ (BJP’s symbol) will bloom,” he said.

“Our party began with 10 members. Now it is the world’s largest, with 11 crore members... Today, there is nothing else but ‘lotus’ in all corners of the country,” Shah said.

Referring to the surgical strikes, the BJP chief said, “There was frustration in the country after the Uri attack. In 10 days, Modi decided to send our jawans into Pakistan for a surgical strike. This event changed the way the world looks at India.”