The Bharatiya Janata Party wants the Supreme Court's Ayodhya deferment order vacated, said senior party leader Arun Jaitley, while stressing that he had a "limited mandate" fom the party in making such a statement.

"The BJP considers judicial delays over 61 years contributed to the failure of resolution in constructing the Ram Temple. It hopes the issue is not delayed any further," said the Rajya Sabha Opposition leader, at a press conference in New Delhi on Friday.

The BJP on Friday indirectly asked the apex court to vacate its stay in the next hearing on Tuesday to let the special Lucknow Bench of the Allahabad High Court deliver the much-awaited verdict without further delay.

Party sources said the statement was necessary as the party leaders, who studied the verdict, felt that there is a possibility of a complete re-trial as one of the judges of the Ayodhya Bench in Lucknow  Justice V D Sharma -- will retire next Thursday. In such a case, sources say, the case will go for a complete re-trial.

The party, however, hopes the Supreme Court will lift the stay to allow the high court deliver the judgment.

NOTICES TO ALL: Notices for the next hearing in the Supreme Court on Tuesday are supposed to be served to all 27 parties involved in the title dispute and the hearing will have to be deferred if even a single party does not get the notice. The high court is forced to hear the case once again after a new Bench is constituted, BJP sources said.

Jurists say that picture was presented by senior advocate Anoop George Chaudhary appearing for the Sunni Central Waqf Board, but Justice H L Gokhale who compelled his senior Justice R V Raveendran to stay the verdict for a week dismissed the argument asserting that "the government could take care of that".

JUDGE'S EXTENSION: They said the Supreme Court's decision to implicate the Government of India in the next hearing on Tuesday may be for that purpose as it can be advised to re-appoint Justice Sharma to continue on the High Court Bench until it delivers the Ayodhya verdict.

Under the Constitution, the President of India can re-appoint the judge as an ad hoc judge in consultation with the Chief Justice of India. The retiring judge also has the option to submit his ruling in a sealed cover to let it become part of the final verdict whenever delivered by the other two judges on the Bench, the jurists said.

LARGER BENCH: The Supreme Court registry, meanwhile, indicated that the next hearing will not be by the same Bench as Justice Raveendran has directed that the matter be placed before the Chief Justice to constitute a larger Bench in view of the differences that cropped up between him and Justice Gokhale during Thursday's hearing.

Not only the BJP, the Vishwa Hindu Parishad, RSS, the Sunni Central Waqf Board, party, the main litigants in the dispute, are opposed to any out-of-court negotiations.

"If a party to litigation does not want reconciliation, how can you grant it? The Court must not be guided by hope when nothing has worked for 60 years," he said. 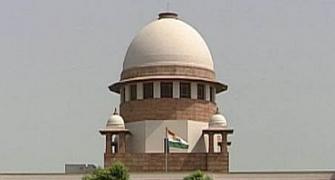