BJP undecided on action against Shourie 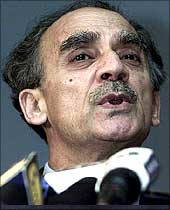 Senior leaders of the Bharatiya Janata Party met in New Delhi on Tuesday to discuss Arun Shourie's remarks against the party and the BJP's future course of action.

According to sources, the leaders reviewed the situation, but refrained from taking any action against Shourie.

Expressing confidence that the party would emerge stronger from this crisis, Naqvi said there was no revolt within the party.

Meanwhile, Arun Shouries, when contacted on phone, told rediff.com that he would react only if the party takes action against him.

Speaking to rediff.com, a senior BJP leader said, "The situation is not as simple as it seems. The party will try its best not to do anything to aggravate the situation further."

On Monday, Shourie had asked the Rashtriya Swayamsevak Sangh to take over BJP's control and described Rajnath Singh as 'Alice in Blunderland'.

"You want to be the Humpty Dumpty and also want everyone to believe what you write. Rajnath Singh is Alice in Blunderland," Shourie had said during a television interview.

Making an observation on the present state of affairs in the BJP, Shourie had said, "BJP ek kati patang ki tarah hain (BJP is like a kite detached from its string)".

"The RSS should take BJP's control in its hands and all the party's top leaders should be removed," Shourie had suggested.

He had added that if the BJP sacked him for his outburst, it would be a case of 'shooting the messenger'.