Slamming government's foreign policy as "hazy and directionless", the BJP on Tuesday said India cannot become a super power by "riding piggy back" on the US and wondered why efforts were not being made to counter China's attempts to attain dominance in South Asia.

Initiating the debate in the Lok Sabha on the Demand for Grant, Murli Manohar Joshi (BJP) attacked the government for its "surrendering" to the US pressure and even toeing its line on several issues.

He picked holes in the foreign policy, saying, "It is hazy, directionless and without clarity."

Joshi said the US would not come to the aid of India in times of war, as its interests were with Pakistan in its fight against terrorism.

Noting that the US was militarily helping Pakistan with weapons that were targeted against India, Joshi criticised the American stand of having "shared interest" with Pakistan.

"It is wrong to say we can become a power with just economic growth. It should be married with military strength too. If economic power is not co-related with military power, we cannot become a super power," he said.

Expressing concern over growing Chinese influence in the Indian Ocean region, Joshi said Beijing was helping India's neighbours to build ports, be it in Pakistan, Bangladesh or Sri Lanka.

"China is helping Pakistan in building the Gwadar port, apart from providing military aid. It is also helping Bangladesh in Chittagong port and Sri Lanka in Hambantotta port. India had, on the other hand, refused to help Bangladesh and Sri Lanka in their efforts.

"We have to focus on our neighbourhood to counter China's growing influence in the Indian Ocean region and its efforts to establish its dominance there," Joshi said.

Noting that China's rise in the region was an emerging challenge, particularly in the wake of its close cooperation with Pakistan, he said Beijing was "making all out efforts to see to it that we do not become global power."

Referring to an article by a Chinese military think-tank on "dividing India into 25 parts", Joshi said Beijing was supporting this thought and added that arms supplies that terrorists, extremists and Naxals got were from China.

"In foreign policy, we should always be prepared for any mischief," he said. Joshi said Tibet was an issue that India should raise frequently, pointing out that the international community would certainly support and help New Delhi in this regard. 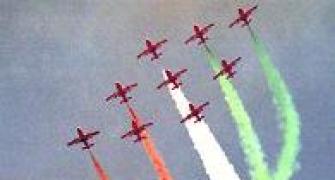