The Bharatiya Janata Party and Rashtriya Swayamsevak Sangh top brass on Tuesday held a meeting, lasting over five hours, to discuss issues of mutual concern but the prime ministerial candidate and the Ram temple at Ayodhya issues did not come up during the parleys.

The high profile meeting, held at a party secretary's house on Rajdoot Marg in New Delhi, was attended by BJP president

RSS chief Mohan Bhagwat was in the capital on Tuesday but did not attend the meeting. However, sources said he was apprised of the issues and the details of the discussion.

Though both RSS and BJP were hush-hush about the subjects discussed in the meeting, sources said the prime ministerial candidate issue did not come up. A section within BJP is keen that Gujarat Chief Minister Narendra Modi be declared the party's PM candidate to maximise its electoral prospects.

The RSS has also praised Modi but has stopped short of openly saying he should be the PM candidate.

The Hindutva agenda and Ram temple issue, which was focussed upon by the Vishwa Hindu Parishad last week at the Maha Khumbh in Allahabad, also did not come up for discussion.

Sources described the meeting as a "routine affair".

The RSS has taken strong note of the saffron terror remarks of Union Home Minister Sushilkumar Shinde and asked BJP to take up the issue inside and outside Parliament in a big way. However, there are concerns that the effort and the public response on it have both been lukewarm till date.

There is also a view with BJP that the hanging of Parliament attack convict Afzal Guru has further blunted the campaign against Shinde.

The RSS is keen that the Sangh Parivar outfits act in tandem with BJP during the forthcoming assembly elections in states like Rajasthan, Madhya Pradesh, Karnataka, Chhattisgarh and Delhi to improve the party's performance in the polls, sources said

Infighting and differences between BJP leaders and RSS or those leaders enjoying closer proximity to RSS, have affected BJP in polls in the recent past, they said. 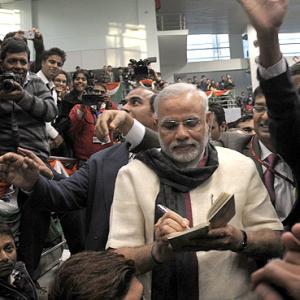