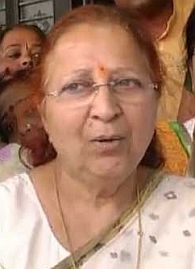 The Bharatiya Janata Party had initially taken a conciliatory stand on the issue with a minister even going as far as to tell rediff.com that Prime Minister Narendra Modi will not indulge in petty politics on this issue. The party had left the final decision to Lok Sabha Speaker Sumitra Mahajan. Rediff.com contributor Anita Katyal reports

Senior Bharatiya Janata Party ministers said rules did not allow the Congress leader to be designated a leader of opposition as the Congress does not have the required numbers to claim this post. A formally designated LOP is entitled to a Cabinet-rank status.

In this connection, they cited a 60-year-old direction by the first Lok Sabha Speaker G V Mavlankar which clearly says that a party must have 10 per cent of the strength of the House for its leader to be recognised as the leader of opposition.

This means that the largest opposition party in the Lok Sabha should have a strength of 55 members. The Congress has only 44 members. Mavlankar’s direction was subsequently spelt out in Direction 121 (1) of the directions by the speaker.

“The speaker will have to change this 60-year-old direction if the Congress is to get this post,” a senior BJP minister told rediff.com.

The Bharatiya Janata Party had initially taken a conciliatory stand on the issue with a minister even going as far as to tell rediff.com that Prime Minister Narendra Modi will not indulge in petty politics on this issue. The party had left the final decision to Lok Sabha Speaker Sumitra Mahajan.

The speaker has not taken a view on this matter but the BJP has hardened its position over the past two days. Parliamentary Affairs Minister M Venkaiah Naidu had dismissed the issue, “Who are we to decide? The people of this country have given their verdict.”

Elaborating further, another Cabinet minister remarked that the people have decided that the Congress should not be given the status of the leader of opposition.

Moreover, BJP leaders never fail to underline that Lok Sabha never had a LOP when Jawaharlal Nehru, Indira Gandhi and Rajiv Gandhi were prime ministers as no opposition party had the requisite numbers to qualify for the post.

While politics is obviously at play in this matter, BJP leaders said legal and constitutional experts consulted by the Lok Sabha Speaker have pointed out that according to the rules, the Congress was not entitled to the post.

Although the Congress has not made a formal request for the LOP post, its leaders have privately pointed out that even though they do not have the numbers, they will be recognised as the biggest parliamentary party and its leader given the status of a LOP as the committees set up for the appointment of constitutional positions like the Lokpal, the Central Vigilance Commission and chairperson and members of the Central Information Commission must have the LOP as a member.

However, BJP ministers dismissed this argument, stating that the appointment process will not be stalled as the leader of the largest opposition party can be made a member.

“The appointments can proceed even if there is a vacancy on the committee,” remarked a senior BJP leader, adding that the rules have taken this into account.

While the BJP is in no  mood to accommodate the Congress with regard to the position of LOP, its leaders said the party would be entitled to the position of the chairman of the public accounts committee as the rules here state the post goes to the largest opposition party in the Lok Sabha.

According to the rules, the deputy speaker’s post should also go to the largest opposition party but there have been past precedents when it has been given to a “friendly opposition party.”

In the present case, the BJP is learnt to have offered the post to Jayalalithaa-led All India Anna Dravida Munetra Kazhagam whose leader M Thambidurai is tipped for this position.

The BJP wants to accommodate both the AIADMK as well as West Bengal Chief Minister Mamata Banerjee’s Trinamool Congress as it wants their support in the Rajya Sabha where the National Democratic Alliance is in a minority. The fourth position which is up for grabs is the chairmanship of the standing committee on finance.