BJP needs Khanduri to cover up its thieves: Rahul

Source: PTI
January 23, 2012 16:45 IST
Targeting the Bharatiya Janata Party over corruption in party ruled states, Congress General Secretary Rahul Gandhi on Monday said it opted for change of guard in Uttarakhand ahead of polls to "cover up" for the wrong-doings under former Chief Minister Ramesh Pokhariyal.

Mocking at the BJP slogan 'Khanduri Hai Jaroori', Gandhi said the Chief Minister B C Khanduri is indeed needed for the BJP to cover up the acts of "thieves".

"Khanduri is needed because the thieves need a cover-up. (Khanduri isliye zaroori hai kyonki choron ko chhupana hai)," he said at a rally at Srinagar, Pauri Garhwal. It was held on a day when Team Anna also addressed a gathering at another venue, Ramlila Maidan, in the city.

"BJP talks about corruption but turns a blind eye to corruption in Karnataka, Uttarakhand, Gujarat, where there are in power," Gandhi alleged.

The Congress general secretary also raked up the issue of the induction of tainted BSP minister Babu Singh Kushwaha into BJP fold in Uttar Pradesh.

Gandhi also announced a plan for a railway line in Uttarakhand if the Congress came to power there and touched upon the issue of locals' migration for employment.

Addressing the gathering at Ramlila Maidan, Kumar Biswas, a member of Team Anna, alleged corruption during the BJP government in Uttarakhand. He at the same time praised the BJP for having passed a "good" Lokayukta Bill in the state. Other Team Anna members Arvind Kerjiwal and Manish Sisodia were present in the rally. 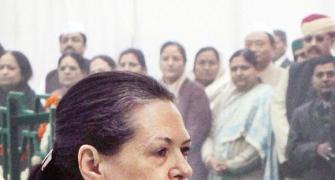