BJP MLA Bharwad arrested in case of firing during poll

Bharatiya Janata Party MLA from Sahera, Jetha Bharwad, was on Friday arrested in connection with the firing incident during the recent Assembly polls, after the court rejected his anticipatory bail plea, police said.

The district court here today rejected the anticipatory bail application of Bharwad, who was absconding since the incident, following which police have taken him under arrest.

District Judge D T Soni, after hearing the arguments from all the parties, refused to grant the prayer of the MLA, who had sought anticipatory bail in the case.

"Following the court order, investigating officer of the case has taken him (Bharwad) under arrest and within 24 hours of his arrest he will be produced before the court where further proceedings will be taken up," Superintendent of Police, Panchmahal, Sachin Badshah said.

An FIR had been registered against Bharwad and nine others, who were allegedly involved in an incident of firing eight rounds from the gun of his bodyguard at a polling booth in Tarsang village of Sahera, during the second phase of polling in Gujarat on December 17.

Four people had sustained injuries in the firing.

The MLA was absconding since December 18 when he escaped from a private hospital in Ahmedabad, where he was brought under detention with the police escort for CT-scan, after he sustained injuries at Tarsang village.

For this, the authorities have suspended eight policemen, including one police inspector, for dereliction of duty.

Bharwad got elected again from the Sahera seat by defeating Congress candidate by 28,725 votes.

The BJP MLA also courted the controversy when he was allegedly seen watching pornographic pictures in the state Assembly earlier this year. 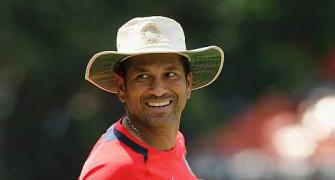 'Sachin should have retired after India-Pakistan series' 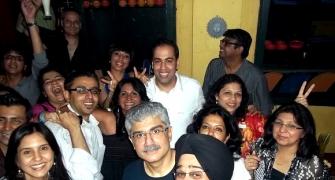 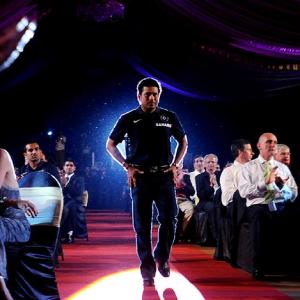 'Don't want Sachin to embarrass himself with failures'