Amid the outrage over the hike in power tariff, the Bharatiya Janata Party's Delhi unit on Saturday filed a police complaint against Chief Minister Sheila Dikshit and a number of senior bureaucrats, alleging their involvement in a "conspiracy" to benefit three private power distribution companies.

In the complaint filed in I P Estate Police station, the BJP alleged that as part of the "criminal conspiracy", also involving two members of the Delhi Electricity Regulatory Commission and officials of three discoms, DERC's move to cut the power tariff by 23 per cent in May, 2010 was stalled.

When asked about the allegations, Dikshit strongly rebutted them, saying, "Why are they filling complaints against me? If they want to file a complaint, then they should file it against the discoms. I am not a party to any such decisions."

The BJP also released the tariff order finalised by the DERC in April, 2010 for 2010-11 -- recommending a cut in tariff -- citing healthy financial position of the power distribution companies.

"We demand a high-level inquiry into the scam," said Delhi BJP chief Vijender Gupta, who along with a number of senior BJP leaders filled the police complaint. He also announced a 40-day long protest beginning on Sunday across the city against
power tariff hike.

On May 4, 2010, the Delhi government, using a special power, had stalled DERC's decision to announce the annual tariff for 2010-11 till it re-examined the demands from
discoms to increase the rates.

The DERC, which was making last minute preparations to announce the new tariff next day, had indicated that it had planned to cut down the tariff by 20 to 25 per cent as discoms would have a surplus of around Rs 4,000 crore if the existing tariff was not changed.

Although DERC was strongly arguing for a cut in tariff, the three-member regulator, following retirement and subsequent appointment of two new members, indicated a sympathetic approach to the demands of the discoms and hiked the tariff by 22 per cent in August last year and 26 per cent in June this year for domestic consumers.

The government's notification stalling the tariff order was quashed by the Delhi high court in February, describing the intervention as "absolutely unjustified, unwarranted, untenable".

Following the Delhi government's intervention, the then DERC headed by Berjinder Singh, who was strongly arguing for a cut in power tariff, had sought the opinion of the then Solicitor General Gopal Subramanium on the issue, who held the government's directive "ultra vires".

In the complaint, signed by one Abhay Verma, the BJP said that after knowing about the tariff order, which was almost agreed on by all the three DERC members, a criminal conspiracy was hatched to stall it, as discoms were demanding a hike in tariff.

Gupta said BJP workers will arrange protests at various places around Delhi, including Kashmere Gate and Shahadra Pool among other places, on Sunday.

On being asked whether this move was a retaliatory action of the party after Arvind Kejriwal raised the issue of power tariff, Delhi BJP chairman Bijendra Gupta said, "We have been for long raising our voice against corruption in the Dikshit-led Congress government of Delhi. Protests like that of Kejriwal come and go. But we as a party have for long championed the cause of the common man." 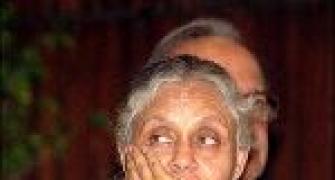