BJP, Cong yet to submit details on electoral bonds 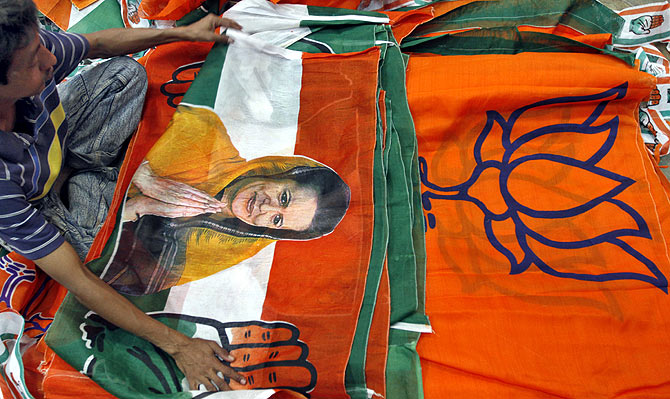 The Bharatiya Janata Party, the Congress and the Dravida Munnetra Kazhagam are among the parties which are yet to submit details of donations received till date through electoral bonds to the Election Commission, sources said on Tuesday.

May 30 was the deadline to submit the details as per a Supreme Court directive.

Last month, the EC had written to all recognised political parties to comply with the Supreme Court directives.

Sources aware of the development said the BJP, Congress and DMK 'at least' have not yet complied with the direction.

Lifting the veil of anonymity from the government's political funding scheme, the Supreme Court had on April 12 directed parties to furnish by May 30 all details of funds received through electoral bonds to the Election Commission in a sealed cover.

Explaining its stand, the EC said it was 'exclusively confined to one of transparency in political funding and not on merits of the scheme'.

As per the scheme, electoral bonds may be purchased by a person, who is a citizen of India or an entity incorporated or established in India.

A person being an individual can buy electoral bonds, either singly or jointly with other individuals.

Only parties registered under Section 29A of the Representation of the People Act, 1951 and which secured not less than 1 per cent of votes polled in the last general election to the House of the People or the Legislative Assembly of the State, will be eligible to receive electoral bonds.

As per the notification, electoral bonds will be encashed by an eligible political party only through a bank account with an authorised bank.

The State Bank of India (SBI) in the 6th phase of sale had been authorised to issue and encash electoral bonds through its 29 authorised branches from November 1-10, 2018.

The Centre and the EC had taken contrary stands in the court over political funding with the government wanting to maintain anonymity of donors of bonds and the poll panel batting for revealing names of donors for transparency.