The Supreme Court on Tuesday remarked the Gujarat government's reply to pleas challenging the remission granted to 11 convicts in the Bilkis Bano gang-rape case is very bulky wherein a series of judgments have been quoted but factual statements are missing. 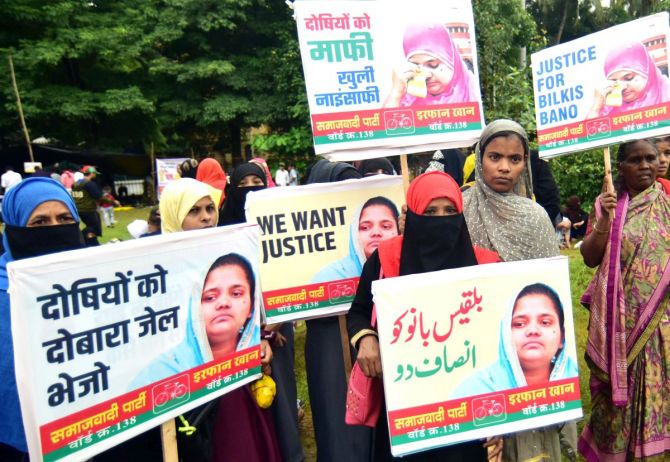 The top court granted time to the petitioners to file their response to the Gujarat government's affidavit and said it will hear on November 29 the pleas challenging the remission of sentence and release of convicts in the 2002 case also involving the murder of seven members of her family during the Gujarat riots.

"I have not come across a counter affidavit where a series of judgments are quoted. Factual statement should have been made. A very bulky counter. Where is the factual statement, where is the application of mind?" a bench headed by Justice Ajay Rastogi observed.

The bench, also comprising Justice C T Ravikumar, directed that the reply filed by the Gujarat government be made available
to all parties.

Senior Communist Party of India-Marxist leader Subhashini Ali and two other women have filed the public interest litigation (PIL) against the remission of sentence of the convicts and their release.

At the outset, senior advocate Kapil Sibal, appearing for the petitioners, submitted that he needed time to file the response.

Justice Rastogi observed that even before he could go through the Gujarat government's reply, it was visible in the newspapers.

Addressing Solicitor General Tushar Mehta, Justices Rastogi said he has not come across a counter affidavit where a series of judgments have been quoted.

Mehta concurred with the observation and said it could have been avoided.

"The judgments were mentioned for easy reference, it could have been avoided," Mehta said.

The Solicitor General submitted strangers and third parties cannot raise the challenge to the remission of sentence and release of the convicts.

The apex court then granted time to the petitioners and posted the matter for hearing on November 29.

The Gujarat government had on Monday defended in the apex court its decision to release the convicts in accordance with the 1992 remission policy since they had completed more than 14 years in prison and their conduct was found to be good.

It also clarified the convicts were not granted remission in consonance with the circular for grant of remission to prisoners as part of 'Azadi Ka Amrit Mahotsav' celebrations.

The state home department said all the convicts had completed more than 14 years in prison under life imprisonment.

'Opinions of the concerned authorities have been obtained as per the policy of July 9, 1992 and submitted to the ministry of home affairs, government of India, vide letter dated June 28, 2022, and sought the approval/suitable orders of India,' the affidavit stated.

The Gujarat government told the top court the Ministry of Home Affairs, Government of India, approved the premature release of the convicts vide letter dated July 11, 2022.

The reply also disclosed the proposal for the premature release of the convicts was opposed by the Superintendent of Police, Central Bureau of Investigation (CBI), Special Crime Branch, Mumbai and the Special Civil Judge (CBI), City Civil and Sessions Court, Greater Bombay.

Bilkis Bano was 21 years old and five-month pregnant when she was gang-raped while fleeing the riots that broke out after the Godhra train burning incident. Her three-year-old daughter was among the seven family members killed.

The 11 men convicted in the case walked out free from the Godhra sub-jail on August 15 after the Gujarat government allowed their release under its remission policy.

The investigation in the case was handed over to the CBI and the trial was transferred to a Maharashtra court by the Supreme Court.

A special CBI court in Mumbai had on January 21, 2008 sentenced the 11 to life imprisonment on charges of gang-rape of Bilkis Bano and murder of seven members of her family.

The state government had submitted its reply to a PIL filed by CPI-M leader Subhashini Ali, Revati Laul, an independent journalist, and Roop Rekha Verma, who is a former vice chancellor of the Lucknow University.

The Gujarat government's affidavit had said, 'A bare perusal of the circumstances in which the present petition is filed manifest that the petitioner is not an aggrieved person but a mere interloper, who has invoked Article 32 jurisdiction vested with this court under the Constitution of India, for extraneous purpose.'

Referring to a 1976 verdict of the apex court, the state government said a person aggrieved should be one who has personal and individual right in the subject matter and that there is infringement of the said legal right or prejudice to some legal interest.

The affidavit noted the petitioner being a 'third-party stranger', has no locus to challenge the remission order passed by the competent authority as per applicable law in the instant case under the 'garb of PIL'.

The state government had said it is its bona fide belief that the present petition is nothing but an abuse of PIL jurisdiction of this court and is motivated by 'political intrigues and machinations'.

On September 25, a convict Radhey Shyam had also questioned the locus standi of the petitioners challenging the remission given to him and the 10 other convicts in the case, saying they are 'complete strangers' in the matter.

On August 25, the top court had sought responses from the Centre and the Gujarat government to the petition challenging the remission granted to the 11 convicts in the case. 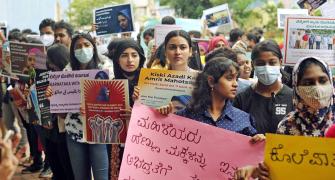 Had 'suitable orders' from Centre: Guj on Bilkis case