IMAGE: Students and police in a standoff at the main gate of the Banaras Hindu University, Varanasi. Photograph: PTI Photo

Three additional city magistrates of Varanasi and two police officers were on Monday removed in connection with the lathi charge on students in the Banaras Hindu University and a high-level probe was ordered into the incident that has spiralled into a major controversy.

As opposition parties targeted the Bharatiya Janata Party over the police action on the campus, Prime Minister Narendra Modi and BJP president Amit Shah spoke to Uttar Pradesh Chief Minister Yogi Adityanath and asked him to address the issue at the earliest.

An FIR has been filed against unidentified policemen in connection with the lathi charge on Saturday night in which a number of students, including women, were injured, police officials said. At least two journalists were also injured in the police action.

A case has also been registered against over 1,000 students in connection with the violence in the university, they said.

The police action took place on Saturday night after students, agitating against an alleged eve-teasing incident, wanted to meet the Vice Chancellor at his residence.

“A committee has been constituted under the chief secretary. Necessary action will be taken on the basis of its report. The committee will see as to how the police had behaved and examine other aspects,” Governor Ram Naik said in Lucknow on Monday while responding to queries from mediapersons about the incident.

The governor described the incident as sad.

The chief minister had on Sunday asked the divisional commissioner to submit details about the incident.

The police action against the students on the university campus has been criticised by various parties, including the Congress and the Samwajwadi Party.

Samajwadi Party workers held a sit-in in Varanasi and slogans were raised against the prime minister.

Over 200 Samajwadi Party activists were detained while they were going to meet the injured students as well as protesting students.

Samajwadi Party’s state spokesperson Manoj Rai Dhoopchandi said a special committee comprising senior party leaders was heading to BHU to meet the injured students and also enquire about the incident from protesting students when the police detained them.

“Unfortunately, the police stopped us from going to BHU, so we sat on dharna at the Singhdwar (in front of BHU main gate),” he said.

Social activist Teesta Setalvad also arrived in the city to attend a programme but was detained by the police.

In the aftermath of the violence, the district administration has declared holidays from Monday till October 2 in all colleges and universities in Varanasi. The BHU had earlier announced that the holidays would start from September 28.

The alleged eve-teasing incident had occurred last Thursday night after which the students started a protest near the university’s main gate.

A woman student of the Arts faculty was allegedly harassed by three motorcycle-borne men inside the campus while she was returning to her hostel.

According to the complainant, the men abused her and fled when she resisted their attempts.

The woman alleged that security guards, about 100 metres from where the incident happened, did nothing to stop them.

She said her warden, instead of taking up the issue with her superiors, asked her why was she was returning late to the hostel.

The warden’s response angered the students who sat on a ‘dharna’ at the main gate midnight Thursday.

BHU students have alleged they have to face eve-teasers on the campus regularly and the varsity administration was not taking any action to stop the miscreants. 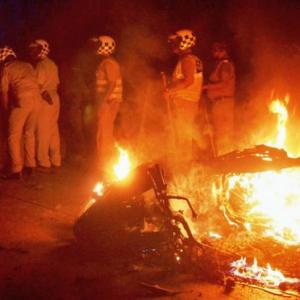