Tragedy took the veil off these women

Rasheeda Bee never went out of her home unescorted until the Bhopal gas tragedy.

Coming from a conservative Muslim family, she began wearing a veil at the age of seven and got married to a tailor when she was just 13.

When the deadly methyl isocynate gas leaked from the Union Carbide factory on December 2-3, 1984, she had no clue where Bhopal's famous Hamidia Hospital was.

Along with her comrade-in-arms Champa Devi Shukla, she is the recipient of the Goldman Environment Award for the year 2004, presented to the duo in San Francisco, USA.

Rasheeda is not alone. There were dozens like her who came forward to bring life in Bhopal back on the track. They worked together breaking all stereotypes of religion, caste and creed. There was just one thing common to them: they were all women.

"Mard to sab laachar pade the (Men were all helpless)," recalls Rasheeda, who never went to school but now carries a stylish visiting card and a mobile phone that has a recent Bollywood song as the ring tone.

Champa Devi Shukla has a somewhat similar background. Both women -- along with several others -- formed a women's group that later took up the seemingly unending fight for justice.

"It was difficult. I had never spoken to any outsider before the tragedy. In fact, my ailing son died because I couldn't take him to hospital, as I was alone at home in those days. He died of some disease I know nothing of. This was long before the gas leak incident," Rasheeda said.

"But when the gas leaked, I had to come out of my home to save my life and then to fight for my rights."

The women's group went door-to-door soliciting support from other women, asking them to join the fight for justice.

"All men - whether Hindu or Muslim - didn't like their women coming out of their homes. But we had no other option," said Shukla, whose husband died three years after the gas leak.

Eleven months after the tragedy, the government started a project in which women were imparted training for three months and asked to start a business on their own. But the victims wanted employment.

They formed a group and met the then chief minister Moti Lal Vora. He referred their case to the State Industry Corporation, which led to the women making stationary items for the corporation. These were used in government offices.

Initially, they were paid Rs 6 a month. Following a protest, the amount was raised to Rs 10-15 per day.

In 1989, when regular employees of the company were being paid Rs 2,400 per month, the gas tragedy victims got only Rs 532. The women decided to fight against this discrimination. Besides, when the corporation made a profit of Rs 400,000, the women demanded a share of the profit. Incidentally, the corporation was a no-profit-no-loss initiative. But the government turned down their demand.

The women's group staged a 27-day protest against this discrmination and then planned a protest march to Delhi on June 1, 1989.

[Inbetween, former chief minister Arjun Singh transferred the stationary manufacturing unit to a government trust. Later in 1988, it was transferred to the government press. The unit continues to function in the premises of the Bhopal civic body. Today, the women are paid Rs 2,500 per month, which is way below the amount paid to the regular employees of the company.]

"We went door-to-door to convince women to join us. We went in groups and convinced families to send their women with us. It was very difficult. I felt nervous and uneasy. I used to sweat while speaking (addressing the other women). My voice faltered but I did not give up. Gradually, our numbers increased," Rasheeda said.

Finally, 72 women, 25 children and 10 men undertook the walk to Delhi. They covered the distance in one month and 13 days.

"Many unmarried women came with us. It was not so easy. There was no other way. Everybody was upset. All women were in trouble. So we came together. We didn't have men in our group. So women volunteered. I told them if Muslim women are going out why not Hindus," says Rasheeda.

"We didn't know anything about Delhi. We made it to the national capital by looking at traffic signposts for direction," Shukla says.

When they reached Delhi, they were told that the then prime minister Rajiv Gandhi did not meet the general public on Saturdays and Sundays. On Monday, he was to go to Paris.

The group stayed near India Gate in Delhi for one week waiting to meet the authorities.

Moti Lal Vora - who was then chief minister of Madhya Pradesh - assured them of justice and convinced them to return to Bhopal. He provided a special vehicle for their return journey.

"After that, he never met us. We were cheated," says Rasheeda.

Then in 1990, the group filed a case in the Jabalpur criminal court. The case was admitted but after seven years they were told that the case was in the wrong court. They were advised to go to the high court or the labour court.

They approached the high court, which accepted their plea. After three years, they were again told that they were in the wrong court and to approach the labour court.

They filed a petition in the labour court in the year 2000. After three years, the labour court gave a decision in their favour. The court said that they should be given the post of assistant binders in the government press and be paid the corresponding wages since 1998.

When Union Carbide merged with Dow Chemical, the group staged a protest in Mumbai in February 2001. About 400 women painted the walls of the office of Dow with red colour, symbolising blood. They asked Dow to take over Union Carbide's liabilities.

Instead, the company slapped a fine of Rs 74,000 on the group for defacing its walls.

The group then started the 'broom movement'. Its members went to Pondicherry, where Dow's head office was located in 2002, with brooms.

The same year, Rasheeda and Shukla went to Switzerland and demonstrated in front of Dow's office.

"We held a sit-in demonstration for four days in zero degree temperature. We presented a broom to the CEO of Dow and told him that it is used to clean homes. It is women's weapon. If a person commits a mistake in India, women beat him with brooms. The broom represented the anger of Bhopal women. We pledged to wipe out Dow with the broom," said Shukla.

Rasheeda and Shukla along with some activists then went to Israel, United States, France, England and the United Nations to protest against Dow.

After receiving the Goldman Award, Rasheeda and Shukla formed a Bhopal Ki Chingari Trust (Spark of Bhopal Trust) on December 4 and donated the prize money ($125,000) to the trust.

It will be used to provide jobs to unemployed women who are gas victims, medical treatment of disabled children, and to constitute an annual award to honour people fighting against polluting companies. The award will carry a cash prize of Rs 50,000.

"Awareness among women is important. I believe if there will be a revolution in this world, it would be by women," Shukla says.

Complaining about the indifference shown by men at the time of the disaster, Rasheeda says, "They neglected their wives and children. Women and children were affected most.

"I think women have an inbuilt capacity to fight all odds," she says. She stopped wearing a burkha (veil) once she started going out to mobilise women to join her struggle.

"I stared covering my body with a chadar (sheet of cloth). But then I started meeting officials and ministers, so I had to discard the chadar too. My husband always supported me." 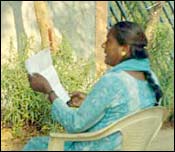 One of the women who joined hands with Rasheeda was Hazra Bee. She lives just opposite the factory. She spends most of the time organizing protests and demonstrations. Her husband cooks food when she is not at home. Now that the compensation has to be distributed again, she is advising people how to go about using it wisely.

"The tragedy forced us to come out of our homes and fight," says a confident Hazra who laughs more than she speaks.