Cong banks on Diggy to breach saffron bastion of Bhopal 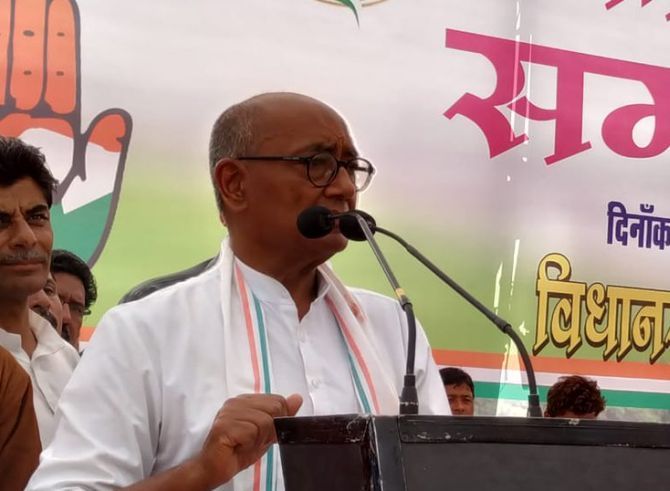 Senior Congress leader Digvijay Singh's entry into the Lok Sabha poll fray from Bhopal, a traditional Bharatiya Janata Party seat, has added an interesting angle into the contest which is going to be prestigious battle for both the parties.

However, the BJP has not yet zeroed in on a suitable candidate to take on the former Madhya Pradesh chief minister, known as 'Raja Sahab' among his followers, who is contesting his first Lok Sabha elections since 1991.

In order to wrest Bhopal from the BJP, the Congress has fielded Singh, 72, from the state capital to give a tough challenge to the saffron party which has not lost from here since 1989.

The Bhopal seat is currently held by Alok Sanjar of the BJP.

The surprise move of the Congress to field Singh has forced the BJP to redraw its strategy for retaining Bhopal, the high-profile seat once held by firebrand saffron leader Uma Bharti.

The delay in announcement of BJP candidates in prestigious seats like Bhopal, Vidisha, Indore and Gwalior, among others, has given an opportunity to the Congress to take potshots at the main opposition party which lost its 15-year-old grip on power in Madhya Pradesh in state polls last year.

Chief Minister Kamal Nath recently quipped, "The BJP should issue an advertisement to ensure it gets candidates for contesting on the remaining constituencies."

The BJP has so far declared 18 candidates for the four-phase Lok Sabha polls in Madhya Pradesh, while the Congress has come out with nine nominees.

The Congress and BJP have not declared their candidates on key constituencies like Indore, Vidisha and Gwalior which are considered as saffron bastions.

From the BJP, the names of former chief minister Shivraj Singh Chouhan and Union minister Narendra Singh Tomar are doing the rounds as probable candidates from Bhopal.

Taking a dig at the saffron outfit for the delay in announcing its Bhopal candidate, Singh's media in-charge, Manak Agrawal, told PTI, "The BJP is unable to find any candidate against Singh as whosoever is selected, that particular candidate backtracks."

"Now they are floating the name of Narendra Singh Tomar (the sitting MP from Gwalior) as he is facing opposition in his new seat Morena too. The Congress will certainly win from Bhopal this time," he claimed.

However, the BJP sought to downplay the issue.

State BJP spokesman Rajnish Agrawal said, "The BJP has not delayed announcement in names of candidates on any seat so far. The party is declaring its candidates as per the dates of notification for nomination process."

The saffron party has announced its candidates on five of the six seats voting in the first phase on April 29. This does not include Chhindwara, the home turf of Nath.

Even the Congress has not announced its nominee from Chhindwara, a party stronghold. The name of Nath's son Nakul Nath is doing the rounds for this seat.

"The defeat of Congress from Bhopal is certain, only party has to name that person who will do it," Agrawal said.

The first phase of polling in Madhya Pradesh will take place on April 29, Bhopal will vote in the third phase on May 12.

Though the BJP has already announced the candidature of Tomar from Morena, it is mulling to shift him to Bhopal, party sources said.