Congress legislator Malkhan Singh Vishnoi, who was evading interrogation for last few days, was arrested by the CBI in connection with the Bhanwari Devi abduction case after he surfaced for questioning on Monday.

The CBI has been questioning his family members for last few days as Vishnoi representing Luni constituency in the Rajasthan Assembly, was evading repeated summons issued by the agency for questioning.

The MLA, who appeared at the Circuit House in Jodhpur on Monday evening, was subjected to questioning but he remained uncooperative prompting the sleuths to arrest him, CBI sources said.

The CBI earlier in the day called Malkhan's three sons and two daughters-in-law at the Circuit House and grilled them to know whereabouts of the MLA.

Malkhan Singh's sister, Indra Vishnoi, who also is one of the main suspects in the case and has been interrogated a number of times, is also absconding apparently to evade CBI

The Congress MLA's brother Parasram Vishnoi has already been arrested with Maderna.

Bhanwari Devi, posted as an auxiliary nurse at a sub-centre in Jaliwada village, went missing on September 1. Her husband Amarchand alleged that she was abducted at the behest of Maderna.

The CBI has also arrested Amarchand on charges of not cooperating with the investigation.

Shahbuddin, Baldev and Sohan Ram are the other accused who are behind bars in connection with the sensational case, while two accused Sahiram and Bishnaram are still absconding. 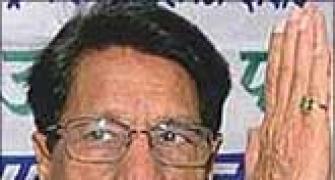