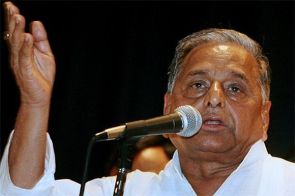 Samajwadi Party supremo Mulayam Singh Yadav, who has come under attack by Steel Minister Beni Prasad Verma, on Friday advised him to learn some decorum as the way in which he was talking is not Congress culture.

"He should learn some decorum. This is not the Congress culture," Yadav said in Lucknow when asked about Verma's recent remarks against him.

Maintaining that Verma was "scolded" by his party for his comments, Yadav asked the minister why he had to say that he would quit the party.

"Unhe (Verma) party me daant padi hai..varna unhone ye kyun kaha hai veh party chhod denge agar unhe roka gaya" (He was scolded by the party or why else he had to say that he would quit the party if he was stopped), Yadav said.

Asked about Verma's allegations including about his connivance with Bharatiya Janata Party in demolition of Babri mosque, Yadav said that the government was free to conduct an inquiry on them.

Verma had on July 2 kicked up another controversy when said in Faizabad in UP that the SP chief was not even fit to sweep the prime minister's residence. "Yadav wants to become prime minister. He should first try to get the job of a sweeper at the residence of the PM," he had said.

Claiming to be "humiliated" by the party's reprimand, Verma had on Thursday threatened to quit Congress as well as the government if he was stopped from "fighting" against Yadav.

Asked whether he would talk to Congress on the Verma issue, Yadav said that he would not do that.