'Karnataka govt will deal with rioters with iron hand'

Terming the violence in the city as a 'well planned act,' Karnataka Revenue Minister R Ashoka on Wednesday said the 'traitors,' who perpetrated the riots would be dealt with an iron hand and steps would be taken to ensure that such incidents do not recur. 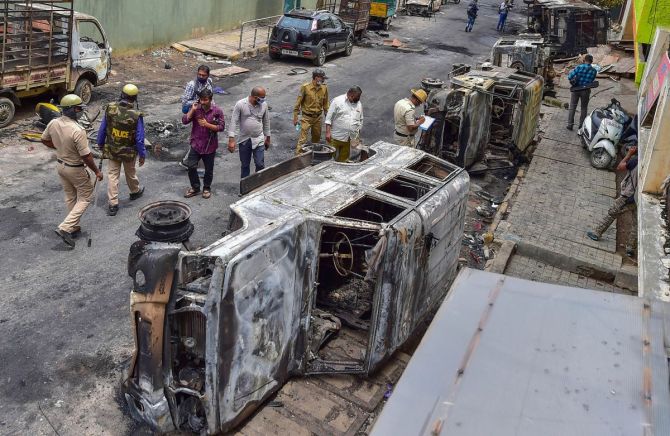 IMAGE: Police and residents walk past charred remains of vehicles vandalised by a mob over a social media post, allegedly by a relative of a Congress MLA, in Bengaluru. Photograph: Shailendra Bhojak/PTI Photo

Speaking to reporters after meeting Congress MLA Akhanda Srinivasa Murthy at Vidhana Soudha, Ashoka said, "The manner in which the riots were perpetrated shows that it was a well planned act and was intended to spread to other parts of the city. These are traitors and we will subdue them."

As many as three people were killed in the police firing and scores other injured including 50 policemen in the violence that erupted on Tuesday night at D J Halli in Pulakeshinagar locality over an alleged social media post on a 'communally sensitive' issue posted by the MLA's relative.

The minister said the law maker's house was completely damaged and belongings including, sarees and jewels were looted while the rest was set on fire.

"It is clear from the intensity of vandalism that the intention was to attack and finish off Srinivasa Murthy.

It has to be investigated whether any anti-social elements from within the state and outside were involved," Ashoka said.

Claiming that the violence was planned to terrorise the people of Bengaluru, Ashoka said government will send across a strong message so that no one would ever dare to take law into their hands again.

He also said he met the chief minister and apprised him of the ground situation.

The minister added that steps would be taken to rein in anti-social elements as vandalism was carried out in a manner that communities were identified to target them.

"Whether Popular Front or Social Democratic Party of India is behind it, we will not bother. These people must be arrested. We will hunt them wherever they are holed up," Ashoka said.

Addressing the media after meeting the minister, Murthy said he wanted the government to provide him protection.

"We were not at home when nearly 3,000 people with petrol bombs, clubs, came and burnt the vehicles, damaged our house. I need protection from the government after this incident," a visibly shaken MLA said.

He said for the past 25 years he has been living with the Muslim brethren but never faced such a problem.

He demanded a CBI or CID inquiry into the matter to bring out the facts.

Asked about his relative Naveen, whose alleged social media post sparked violence, Murthy said, "Naveen is not my relative. For the past 10 years we have not been in touch with him."

Meanwhile, Bharatiya Janata Party leaders questioned the Congress as to why it hesitated to condemn the riots by "minority groups" on the residence of its own MLA.

The ruling party leaders in Karnataka projected the incident that led to violence in parts of the city as an attack on a Dalit MLA.

"Dead silence by @INCIndia @INCKarnataka even after their Dalit MLA Sri Akhanda Srinivasa Murthy was attacked, house ransacked yesterday in Bengaluru. Total support for RIGHT TO RIOT ...? For them appeasement is the only official party policy," BJP national General Secretary B L Santosh tweeted.

In another tweet, Santosh said, "After 14 hours @INCKarnataka wakes up to blame Naveen (MLAs nephew) for facebook post & Police for delay in taking action. One straight question .. Does your Party support riots like this? Why Cong hesitates to condemn riots by minority groups..?#CongSupportsRiots."

Demanding strict action against those involved in the incident, Karnataka Tourism Minister C T Ravi said some people feel that they are above the law. This is the result of seven decades of appeasement politics, he said.

Seeking to know if the "Lutyens and liberals" talk about this growing intolerance in a particular community in Bengaluru, BJP MP Shobha Karandlaje said this was nothing but the result of Congress' appeasement politics.

Karandlaje who visited Pulikeshi Nagara assembly constituency in a tweet said, "PFI-SDPI conspired this violence, they targeted only Hindu houses & burnt public properties. I strongly condemn this behaviour of a communal elements & urge @CMofKarnataka to take stringent actions against the culprits." 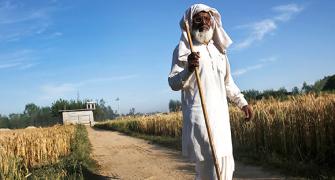 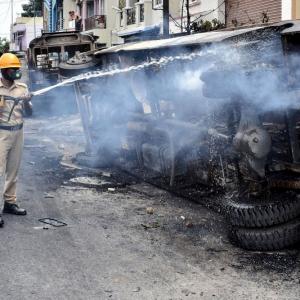 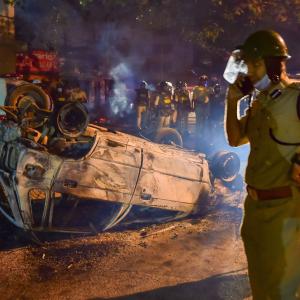