The Lucknow bench of the Allahabad High Court may have rejected Ramesh Chandra Tripathi's plea for postponing the Ayodhya verdict and to explore possibilities of an out-of-court amicable settlement, but the 73-year-old man has still not lost hope and he is air-dashing to New Delhi, renewing his appeal before the highest court of the land.

The bench also imposed a fine of Rs 10 lakh on Tripathi, who had sought a court order directing both parties to settle the matter out-of-court or even take the matter into arbitration, as the fallout of this verdict could be violent.

"The high court order has not disheartened or demoralised me at all and I am definitely going to file an appeal before the Supreme Court," he told this scribe on Friday.

"I am not ready to give up as my effort was aimed only at serving the larger objective of ensuring peace and communal harmony in the country," he said.

"Since there is very little time left for the final judgment which is slated for September 24, I have to rush to Delhi as soon as possible," he said.

When his attention was drawn to the high court's order that has not only questioned his bonafide, but also charged him with making an "attempt to divert, deviate and obstruct" the Ayodhya case that was pending before courts for six long decades, Tripathi shot back, "Well the high court has all the right to draw its own conclusions ,but tell me what would a 73year-old man achieve by doing all that the court has accused me of attempting?" 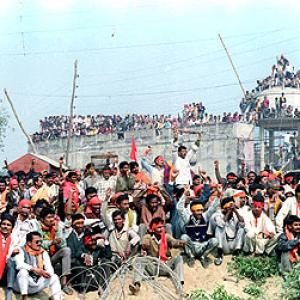 No out-of-court settlement for Ayodhya case