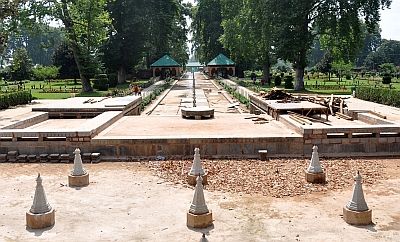 Brushing aside the strong opposition to it from separatist leaders, religious heads and some civil society groups, authorities have decided to go ahead with the high profile Zubin Mehta concert in Srinagar on September 7.

Mehta would conduct the over 100-member Bavarian state orchestra in 17th century Shalimar Garden which is being renovated and refurbished at a whooping cost of Rs 3.62 crore for the concert.

Scores of workmen are working overtime to erect the orchestra stage and sitting spaces for over 1,500 special invitees to the concert, to listen to the timeless music of Beethoven, Haydn and Tachaikovsky.

The event hosted by the German embassy will be telecast live on Doordarshan and would be beamed to 50 countries of the world. Sources said 700 VIPs would be arriving in special flights to attend the concert while Mehta and other musicians would reach by a special chartered flight on September 5.

The garden which had been laid out by the great Mughal emperor Jehangir is being tastefully bedecked with the fountains receiving a facelift and the water bodies being cleared. The magnificent Chinars which pepper the terraced garden are being illuminated to lend a rear aura to the event.

Hundreds of security personnel have been detailed to provide security to the concert which has been labelled as Ehsaas-e-Kashmir (Feelings of Kashmir). “There is a specific security drill associated with such an international event and we are following that”, said an officer.

The cost of the concert which will be in crores will be ‘borne by benevolent sponsors mainly from the business world in India and Germany, as well as “Incredible! India”and the German foreign office’.

The project took shape on July 22 last year when German Ambassador to India Michael Steiner bestowed upon Mehta the Commander’s Cross of the German Order of Merit, according to a press statement.

The event has, however, drawn flak from the separatist camp, the Grand Mufti of Kashmir and some civil society groups. The hard-line separatist leader, Syed Ali Shah Geelani has opposed the concert on the grounds that ‘the concert would send a wrong signal to the World about the ground situation in the valley’.

Geelani has called for a strike on Saturday when the event is being held in Srinagar and post Friday prayer protests a day earlier.

Opposing the concert, moderate All Parties Hurriyat Conference chairman Mirwaiz Moulvi Umar Farooq said that the money being spent on the event could be utilised for providing medical facilities and education to the people of Kashmir.

However, there are voices supportive of the event. Waheed Jeelani, a famous singer feels that ‘art, culture and theatre were noble fields and should not be tampered with by politics’. Tourist players in Kashmir feel the concert would send a positive message across the world and help promote tourism to the valley.

Image: A stage being prepared for the concert at the Shalimar Garden in Srinagar