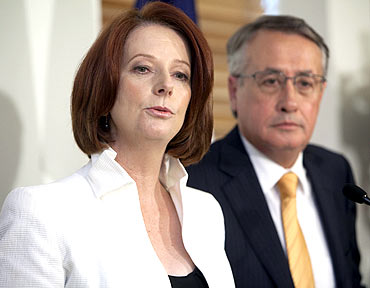 "Labor is prepared to govern," Gillard told reporters in Canberra after Tony Windsor and Rob Oakeshott, the two rural independent lawmakers, said they will support her party, ending weeks of political instability following a hung parliament, the first since 1943.

"I believe the Australian people, given the closeness of this vote, want us to find more common ground in the national interest," 48-year-old Gillard said in her first remarks after snatching victory.

Gillard, the first woman Prime Minister of Australia who assumed power 10 weeks ago in a party revolt, said it is likely she would be in a position to administer oath to her new ministry early next week.

She said her minority government will be held to higher standards of accountability as a result of the deal struck with the independents. Gillard thanked all independent MPs, including Bob Katter who went against Labor, for the 'tone and tenor' of their negotiations.

She said she had no idea about the decision taken by Windsor and Oakeshott to back her and learnt about it while watching their live press conference.

"So let's draw back the curtains and let the sun shine in, let our Parliament be more open than it was before," she said.

Gillard also thanked Abbott for the 'common courtesy' of phoning her after Windsor and Oakeshott made it clear that they would back Labor.

"Nevertheless I could not have asked for more support from my colleagues, from my staff and from the party at large."

Gillard, who managed the narrowest victory in the 150-member House of Representatives with the support of independents, said, "Ours will be a government with just one purpose, and that's to serve the Australian people."

"We will be held to higher standards of transparency and reform and it's in that spirit I approach the task of forming a government."

The prime minister said it was likely she would be in a position early next week to swear in a new ministry and added that Labor would govern in the best interests of the Australian people.

"I know that if we fail in this solemn responsibility, we will be judged harshly when we next face the Australian people at the next election," she said.

Under the deal with the independents, Gillard had offered Oakeshott a frontbench role to serve regional Australia in a Labor government, according to 'The Australian'.

The PM, however, said the package was a 'fair share.' She declared that her 9.9 billion-dollar deal with the independents will deliver a net impact on the budget of just 43 million dollars.

Labor will save 700 million dollars by deferring an election commitment to offer a tax discount on interest income to 2012-13. The regions' deal includes 763 million dollars in new spending to accelerate the Pacific Highway and Tamworth Hospital redevelopment, a 600 million-dollar Priority Regional Infrastructure Fund and amended transitional arrangements of fuel ethanol taxation.

Savings will include 106 million dollars after election commitments. Gillard said Labor was prepared to deliver a stable and effective government for the next three years after winning the support of the two key rural independents.

She said Abbott had called to wish her well and she promised to strive for 'common ground' with the Liberals and Nationals.

A disappointed Abbott said he would continue to stand as leader, possibly at a party room meeting to be held on Thursday, despite the Coalition being denied a chance to rule by the independents.

He said he hoped "'for the country's sake' that Labor would be better in its second term than it had been during the past three years - and rediscovered its soul.

Abbott, however, said parliament would be vastly improved by reforms agreed to by both parties with the independents. He said he would not let his disappointment at the result blind him to the 'great strengths' of Australia's parliamentary system which he would always respect.

The coalition would hold the government 'ferociously to account,' he said. 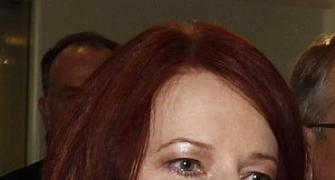 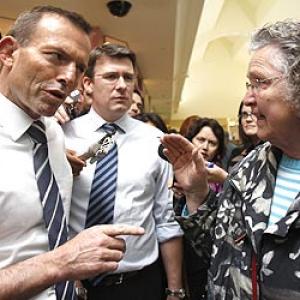 Will the Mad Monk pull a surprise?