Attempt to 'divide and mislead': Farmers on PM's speech

Protesting farm unions on Friday alleged that Prime Minister Narendra Modi's address appeared as an attempt to "divide and mislead" the farmers and said they want a legal guarantee on minimum support price. Reacting to the prime minister's allegations that political rivals were misusing the protest to push their agenda, farmer leader Abhimanyu Kohar said unions do not allow any political party to use their stage and accused the government of diverting the issue.

Prime Minister Narendra Modi on Friday squarely blamed those with political agenda for the deadlock in the Centre's talks with protesting farmers and asserted that his government is willing to hold dialogues with all, including those staunchly opposed to it, as long as talks are based on farm issues, facts and logic.

In a blistering speech targeting Opposition, Modi said when the agitation began farmers had some genuine demands like guaranteed minimum support price but people with political motives then took over and began making unrelated demands like the release of those accused of violence and making highways toll-free.

Kohar said, "The prime minister's claim that we are being misguided by other political parties is false. It has been a month since we have been protesting at Delhi borders, and we have not offered our platform to any politician.

"In fact, we have banned them from using our stage. Our protest is not political."

Thousands of farmers, mainly from Punjab, Haryana and parts of Uttar Pradesh, are camping on various Delhi borders for almost a month to protest against the three farm laws. At least five rounds of formal talks have failed to break the deadlock with the farmer groups refusing to accept anything less than the complete repeal of the laws.

"In public speeches, the prime minister said the MSP will remain. Then why is he afraid of giving a legal guarantee for it? Why cannot the government give it in writing?," Shiv Kumar Kakka, a senior leader of Sankyut Kisan Morcha -- an umbrella body of 40 farmer unions -- told PTI.

"PM Modi made an attempt to divide and mislead the farmers during his address today...in election rallies, he says his government has fixed MSP as per the recommendations of the M S Swaminathan Committee. But in court, they say it was not possible to do so," Kakka alleged.

All India Kisan Sangharsh Coordination Committee secretary Avik Saha sought to know why the central government is not giving a legal guarantee on MSP.

Saha said the prime minister on Friday only addressed farmers from six states and wondered why he did not address issues of protesting peasants.

Kohar, who is also the member of Sankyut Kisan Morcha, said during his speech, PM Modi claimed that the three farm laws will benefit farmers, but he did not tell how the new laws will be beneficial for the peasants.

"You cannot go away by saying that it is good law, you will have to prove how it is good for farmers. There should be arguments based on facts," he said.

Avtar Singh Mehma, state press secretary, Krantikari Kisan Union (Punjab), alleged that the government's claim that some farmers are in support of the three laws is "false". 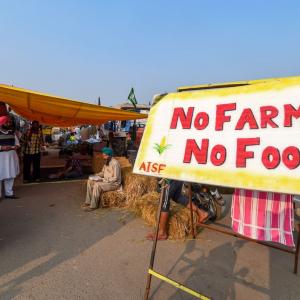