Taking a serious note of the threat posed by the anti-talks faction of the United Liberation Front of Assam to disrupt the visit of the Prime minister Dr Manmohan Singh to Guwahati on April 20, the Northeast Frontier Railway has cancelled eleven local trains and rescheduled four others till April 20.

The trains have been cancelled or rescheduled following the 12-hour Assam bandh call given by ULFA's anti-talk faction on April 20 during Prime Minister Dr Manmohan Singh's scheduled day-long visit to the state.

Prime Minister Manmohan Singh will be visiting Assam on April 20 to inaugurate the platinum jubilee celebrations of Assam assembly.

According to an NFR spokesman, in order to provide additional security to long-distance trains, pilot engines will be run ahead of those trains as precautionary measure and this will lead to reduction of track capacity resulting in cancellation and rescheduling of several local trains.

Meanwhile, Assam police apprehended three hardcore militants of the banned ULFA, including a woman cadre from Tinsukia bus stand on Tuesday evening and recovered two grenades from them.

The police claimed that the ultras were planning to carry out subversive activities in Guwahati. Police also recovered four mobile phone sets with 11 SIM cards and some incriminating documents from the arrested militants. The apprehended ultras were identified as Ganesh Das, Joya Boro and Paban Das. 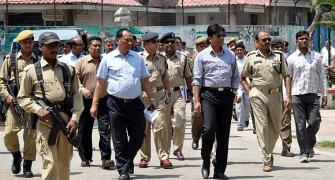