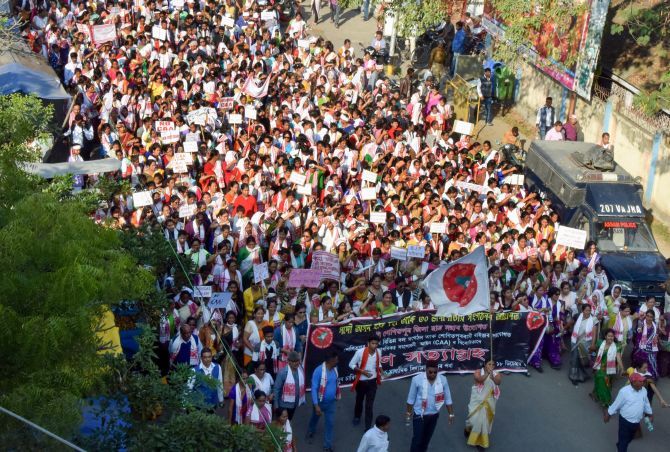 IMAGE: All Assam Students' Union members along with locals during their Satyagraha rally against the Citizenship Amendment Act (CAA) at Tezpur in Sonitpur district, on Wednesday. Photograph: PTI Photo

Normal life is back on track in Assam and West Bengal with the states remaining peaceful after several days of violent protests against the new citizenship law.

The curfew imposed in Dibrugarh has been relaxed for 14 hours since 6 am on Thursday but mobile internet services remained suspended, officials said.

The curfew imposed in Guwahati on December 11 was lifted on Tuesday following improvement in law and order, they said.

Businesses and banks in Guwahati were open and vehicles plied the roads but schools and colleges were closed.

Flight operations and railway services have resumed in Guwahati while flights to and from Dibrugarh airport were also operating as per schedule, the officials said.

The All Assam Students' Union (AASU), which is spearheading the agitation against the amended Citizenship Act, has planned sit-ins on December 21 and 23 and rallies on December 24, 26 and 28.

Islamic outfit Popular Front of India's Assam unit chief Aminul Haque and another office bearer were arrested on Wednesday for their alleged role in the violence during protests over the citizenship law, police said.

Also, the Assam Human Rights Commission has directed the chief secretary to constitute a high-level panel for probing deaths of five protesters in police action during protests over the amended Citizenship Act here last week.

Meanwhile, the 12-day Guwahati Book Fair, organised by the state government's Assam Publication Board, has been postponed indefinitely due to 'unforeseen circumstances', Board Secretary Pramod Kalita said.

Assam witnessed violent protests against the Act with three rail stations, a post office, a bank, a bus terminus, shops, dozens of vehicles and many other public properties being set ablaze or damaged by the protesters.

West Bengal was peaceful with no fresh incident of violence so far on Thursday, police said.

However, stray incidents of clashes between groups supporting the amended Citizenship Act and those opposing it were reported on Wednesday.

Five persons were injured when crude bombs were hurled at a protest march taken out against the new citizenship law in North Dinajpur district, a police officer said.

The agitators had blocked NH 34 for two hours against the incident.

The state had witnessed violence and arson from December 13 to 17 during protests against the new citizenship law.

More than 350 people have been arrested for their alleged involvement in the violence.

West Bengal Chief Minister Mamata Banerjee, who has been at the forefront in opposing the new citizenship law and the National Register of Citizens, is on Thursday scheduled to conduct a protest rally in Esplanade area in the heart of Kolkata.

She had taken out three protest marches in Kolkata and Howrah from December 16 to 18.

The Left parties are also scheduled to hold a protest march against the new citizenship law from Ramlila Maidan to Lady Brabourne College in Kolkata.

Intellectuals are slated to take out another protest march from Ramlila Maidan to Hogg Market.