The lockdown led to the unlocking of Assam artist Kishor Kumar Das' creative instincts as he launched a personal journey of "a drawing a day" to create 100 artworks, documenting the prevailing situation during the period. IMAGE: One of the paintings done by Assam artist Kishor Kumar Das' during the lockdown. He titled this one LOCKDOWN 76... "UNDER TREATMENT". Photograph: Kishor Kumar Das/Facebook

The lockdown proved to be "oxygen for my art" as he decided to utilise it to create a body of works, reflecting the situation arising due to the pandemic and the subsequent lockdown, said Das, who is also the Secretary of the Gauhati Artists' Guild.

The Lalit Kala Akademi member minutely observed ordinary household objects, mostly traditional Assamese items, and used them as motifs to interpret them in relation to the happenings beyond one's home.

Each drawing, shared on social media, had a predominant message which was accordingly titled.

The artworks, done on ivory paper with pen and ink, covers almost all aspects of the pandemic, the lockdown, the hardships faced by migrants, the resilience of the people, other happenings during the period, including the Baghjan gas well fire, the coal mining controversy related to the Dihing Patkai Wildlife Sanctuary.

"I got the time during the lockdown to talk to my inner self, which responded to my artistic sensibilities and influenced the entire creative journey," Das said.

He said that each drawing of the series which was completed on Thursday has a social message and carries a title conveying it to the viewers but they are free to interpret it in their own way.

"My professional and social commitments earlier did not give me enough time to pursue my art regularly, but the lockdown provided me with an opportunity to explore new ideas, thoughts, conceptualise and create artworks relevant to the contemporary time," he said.

An artist cannot exist in a "vacuum but has a social responsibility and commitment which I have tried to fulfil by creating and documenting the varied aspects of life, the changes and the impact it has on people, their lives and surroundings during the lockdown", he said.

"I decided to utilise the lockdown in creative pursuits and initially considered doing 10 drawings. But later when I uploaded these on my Facebook page, my friends, well-wishers and even the public reached out to me, encouraging me to continue with my creation," he said.

The drawings were initially titled simply as 'Lockdown' and numbered but subsequently, he began to title them according to the theme like Quarantine, Change in Lifestyle, COVID-19 spread in Assam, Spanish Garden Containment Zone, Unlock, Under Treatment, The Infested Mind, Hunger, Online classes, Reconciliation, Fire in Baghjan, The smell of Bushfires, among others.

Das has focused on environmental degradation in several of his drawings and also on the media.

He also painted a few works based on the poetry of Sahitya Akademi awardee and former state Director General of Police Harekrishna Deka who in turn also wrote some poems based on Das' drawings.

His hundredth and final work, uploaded on Facebook on Thursday, was titled 'Joi Aai Asom' (Hail! Mother Assam) and is a futuristic representation of positivity, optimism, hopes and dreams of the people of the state.

"I have created these drawings for the people and hope they are inspired to explore its varied nuances further to give a meaning or interpretation of their own," he said.

Das said that he plans to hold an exhibition of his 100 drawings once the situation returns to normal and will also compile these in an art album.

"COVID-19 and the lockdown will one day become history and I hope my creation will also be a minute part of this history. Each day of the lockdown has been etched in memory and my album will be testimony to that memorable experience for posterity," the artist added. 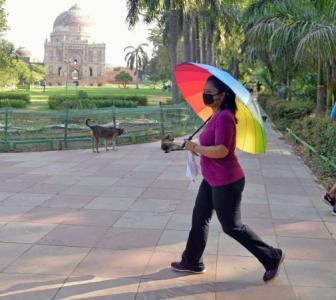