India continues to be optimistic even though Tahawwur Rana has been acquitted of charges of involvement in the 26/11 Mumbai terror attacks by a United States court.

However, the biggest worry for the Indian agencies is the provision mandated under Article 20 of the Indian Constitution. The Article says that a person cannot be tried twice for the same offence, as it will amount to double jeopardy.

Although India will go ahead with its investigation and ultimately file a chargesheet against Rana, the question is whether Rana's legal team will make use of the provisions in the Indian Constitution. The charges levelled in the US and also in India are almost the same. Rana has been accused of aiding David Headley to stage the 26/11 attack. The US court has, however, not found any merit in that argument.

Legal experts say the verdict of the US court will have absolutely no bearing on the investigations in India. They say that Rana could not have been tried in the US court for an offence committed in India.

This verdict should not have any impact on our individual case, says Justice Santosh Hegde, former judge of the Supreme Court of India. This verdict may have an influence on our legal system, but there is no precedent that our judicial system ought to abide by the verdict of the US court.

With regard to Article 20, legal experts point out that there should not be any problem for India to try him once again for the same offence. Even if Rana were to put forth that argument, India can always argue stating that he was tried in the US for an offence committed in India and this itself is not acceptable to us.

This is a matter which will be debated in the legal circles over the days to come because it is expected to come up once a chargesheet is filed by the National Investigating Agency.

Looking at the legal provisions available at the moment, there does not appear to be any precedent on this aspect of the case, and it seems as though there will not be any problem to try Rana in India.

The only issue will be the impact the Rana case will have on the international community, which more or less treats the verdict of a US court as the gospel truth.

However, legal experts say that all these factors ought not to deter the Indian agencies and they should just go ahead with whatever they have. The aim should be to put up a strong case and ensure that he is convicted for his offence in India in relation with the 26/11 attack. 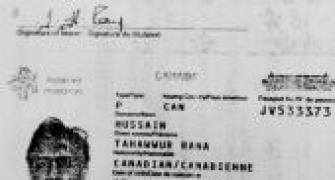