The Army on Tuesday said a heavily-armed Pakistani intruder was shot dead along the border in Akhnoor sector in Jammu, foiling the 'nefarious plan' of terrorists to disrupt the forthcoming panchayat elections in the state.

The recoveries made from the gunned-down terrorist included two assault rifles along with two magazines and 234 rounds of bullets, five pistols with 10 magazines and 60 rounds, 15 hand grenades and 12 fuses for Improvised Explosive Devices, Jammu-based Army PRO Devender Anand said.

"This huge cache has scuttled the nefarious plans of the terrorist outfits to derail peace and harmony in the region and disrupt the forthcoming panchayat elections in the state," he said. 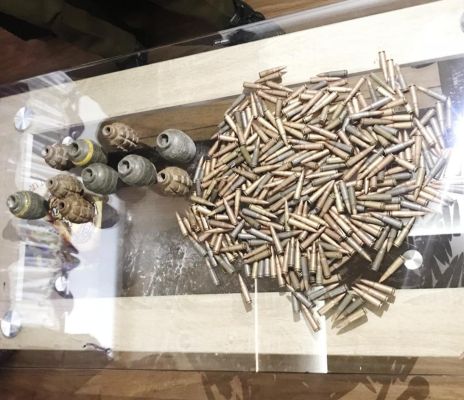 Jammu and Kashmir police on Tuesday arrested a female over-ground worker carrying ammunition, including grenades and live rounds, during a search operation at a check-point in Lawaypora in Srinagar.

Police on Tuesday said that it arrested the woman with 20 grenades.

“Today evening upon receipt of reliable information that some OGWs are coming from Baramulla towards Srinagar with ammunition, a check-post was laid opposite Kirmaniabad shrine near Lawaypora," a police officer told a local news agency in Srinagar.

During the search, a woman travelling in a golden Chevrolet Tavera was found in possession of 20 grenades along with a large cache of ammunition, he said.

The vehicle and the bag have been seized and the woman has been taken to police station for further questioning, he added.

Senior Superintendent of Police Srinagar Imtiaz Ismail Parray also confirmed the incident and said that a case has been registered in Parimpora police station and further investigation has been initiated.

-- With inputs and photograph from Umar Ganie for Rediff.com in Srinagar

The nine-phased panchayat elections will get underway on November 17.

Anand said an ambush party of the army killed the terrorist on this side of the international boundary at about 1.50 pm.

"The entire area near the scene of the gunfight has been cordoned off and search and destroy operation is still in progress," Anand said.

"The timely intercept of the intrusion of the terrorists with the cache of arms, ammunition and other war like stores has thwarted any possible untoward incident, planned by the terrorist during the scheduled elections in the state," the Army PRO said.

Meanwhile, two unidentifiable terrorists were killed on Tuesday when the Army foiled an infiltration bid along the Line of Control in Jammu and Kashmir's Keran sector.

"An infiltration bid was eliminated by alert soldiers in Keran sector in Kupwara district today," an Army official said.

He said two terrorists were killed in the operation, which was going on till last reports came in.

The identity and group affiliation of the gunned-down terrorists was not immediately known.

The infiltration bids come after a series of ceasefire violations by Pakistan which left three army personnel and a porter dead and three Border Security Force troopers injured on Friday.

"The Indian Army is carrying out relentless and robust anti-infiltration operations in the state to break the backbone of terrorism and nip the designs of anti national elements and the enemy to foment trouble south of the Pir Panjal ranges in Jammu and Kashmir," the PRO said.

The porter was killed by a Pakistani sniper along the sector followed by similar attacks from across the border in Sunderbani and Noushera sectors of Rajouri and Krishna Ghati sector of Poonch over the past three days.

The casualties suffered by Pakistan in the retaliatory action could not be ascertained immediately but several of their posts including the ones with snipers were hit over the past four days, officials said.