An uneasy calm prevailed in Kudankulam on Tuesday with police tightening vigil as anti-nuclear protesters continued with their relay fast at Idinthakari, epicentre of protests against the Kudankulam Nuclear plant, condemning the action against anti-KNPP activists.

Police said the situation was calm but they are keeping a strict vigil. "Security has been stepped up," sources said.

Sources close to S P Udhayakumar, convener of People's Movement Against Nuclear Energy, spearheading the protest against KNPP, said key leaders including him and Pushparayan, will court arrest by turning up at the Kudankulam Police Station.

The agitation had turned violent on Monday when one person was killed in police firing when protesters tried to attack a police station at Manapad in Tuticorin district.

The year-long agitation, confined to Indinthakarai and nearby villages, spilled over to neighbouring Tuticorin district and was intensified after authorities announced loading of uranium fuel in the plant.

Police had also resorted to lathicharge and firing of teargas shells on Monday as the seashore in Indinthakarai village turned into a battlefield with clashes between protesters and police.

Slamming the police action, PMANE had on Monday launched a 48-hour relay fast against it.

A cameraperson of an English TV channel allegedly suffered injuries on the forehead during the melee in the police action. Channel authorities said a complaint has been lodged at the police station in Kudankulam.

Tirunelveli District Superintendent of Police V Bidari promised strong action by identifying the personnel involved in the alleged assault on the cameraperson.

Expressing solidarity with the protesters and condemning the police action, fishermen in southern districts are staying away from fishing on Tuesday.

Situation in neighbouring districts is normal, according to police.

The anti-KNPP protest took a new turn when PMANE gave the call for a siege of the plant as a last-ditch effort to stall the Indo-Russian project after regulatory authorities gave their clearance for loading the uranium fuel in the first of the two reactors.

Around 4,000 security personnel, including Rapid Action Force, have been deployed in the area.

Tamil Nadu Chief Minister Jayalalithaa has defended the police action and appealed to people not to fall prey to the "designs" of anti-nuclear lobbyists and to maintain calm.

The first unit of KNPP was scheduled for commissioning in December last, but ran into trouble with locals demanding its scrapping on safety concerns. 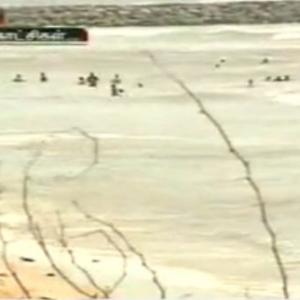